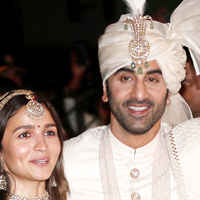 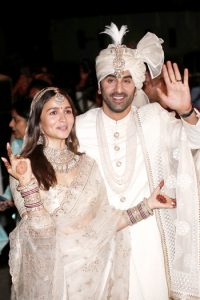 Ranbir Kapoor and Alia Bhatt, the most talked-about couple in Bollywood, tied the knot on April 14, 2022. Despite the high profiles of both the bride and the groom, the couple decided to do away with the concept of the “Big Fat Indian Wedding” opting instead for a simple wedding in the presence of their family and close friends. The marriage took place at Kapoor’s Pali Hill residence “Vastu.” The pre-wedding ceremonies of Mehndi and Haldi were also celebrated at “Vastu.”

Kapoor and Bhatt dated for five years before getting married. Their marriage was anticipated this year, with several speculations about the date. However, both of thee tight-lipped about the exact day. It was only on the day prior that Kapoor’s mom Neetu Kapoor declared that the wedding would take place the day after. It was a simple and elegant ceremony where Neetu Kapoor, Mahesh Bhatt and Soni Razdan, parents of Bhatt, and Riddhima Kapoor Sahni and Shaheen Bhatt, the sisters of Kapoor and Bhatt, respectively, along with other members of Kapoor’s and Bhatt’s families were present. Kapoor’s late father Rishi Kapoor’s picture was placed at the wedding site. Bhatt’s friends, along with the couple’s close friends Karan Johar, Ayan Mukherjee, Ranbir’s cousins Karishma Kapoor, Kareena Kapoor Khan with her husband Saif Ali Khan and their kids were also present.

Bhatt looked radiant in her bridal outfit by Sabyasachi. It was an ivory organza sari with heritage jewelry designed by Sabyasachi. Ranbir, too, was a Sabyasachi groom with a matching embroidered silk sherwani. For Mehndi, Bhatt wore a magenta pink lehenga and a blouse while Ranbir donned a matching outfit – a pink kurta set by Sabyasachi. First photographs of the wedding were posted by Bhatt with an emotional note about their relationship and hopes of creating more memories in the days to come.