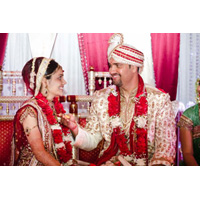 Aarti and Amit have known each other for a very long time, having met at a Thanksgiving celebration in 2000. Though they started their relationship as friends, the stirrings of romance were soon apparent.

Clarity in thought is sure to reflect in several aspects of your life. For one, you will see it in the choices you make, the success you taste, and the things with which you are associated. When this clarity exists in your marriage, there is nothing but bliss in store for you. This is just the case with Aarti Engineer.

In speaking with the 25 year old CPA from Florida, one is struck by her practicality. Even her fairy tale romance seems to have elements of common sense threaded throughout. Aarti and Amit have known each other for a very long time, having met at a Thanksgiving celebration in 2000. Though they started their relationship as friends, the stirrings of romance were soon apparent. While Amit wooed Aarti earnestly, she took her time and enjoyed the attention before she finally agreed to date him in December 2002. Since then, they have explored the world and life together as a couple.

It was not until a vacation in 2010 that the two began discussing the prospect of marriage. In July 2010, as the two were blissfully circling clear skies in Key West and feeling the wafting winds caress them, Amit broached the subject of marriage subtly as they were parasailing. Shocked, but pleased, Aarti naturally agreed. Just two months later in September, Aarti and Amit were engaged. They decided to plan their wedding for one year later.

Most of the planning and arrangements were taken care of by members of both families. Much thought was given to ensuring that the couple’s taste and choices were reflected in the colors, design and clothes. The Rosen Centre in Orlando, Florida, was booked for the wedding and reception. It was not just the ideal choice for the ambience it allowed, but also for the fact that it proved most convenient for friends and family who were to attend. 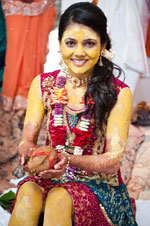 Celebrations kicked off with the mehndi ceremony, where the theme was purple, mauve and emerald. The stage was decorated with drapes in these colors cascading down the sides, with a grand love seat positioned in the center. Crystal accents were provided to add to the dramatic effect. The mehndi ceremony included a small reception.

For the wedding, Aarti decided she wanted to look and feel every bit like a princess. Her clothing was grand and regal not just in style, but also in color. After three days of carefully scouring through the markets of India, Aarti set her eyes on a lehnga choli, which was fashioned like a sari. The moment she saw it, she knew it was the one. Made with rich red featuring antique gold and beige intricate work, the outfit was exactly what Aarti wanted to complete her look.

The wedding theme was royal and in the style of a Maharaja and Maharani. Opulence gleamed from every corner. The color theme was red, green and ivory, and traditional drapes stood out in deep red, while the modern acrylic mandap reflected contemporary taste. 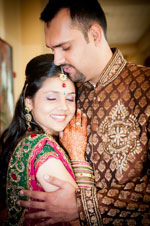 Aarti was dressed up with muted class. Her ensemble stood out beautifully, and she decided to let it be the highlight, opting for light, natural make up with tones of soft red and beige. Her hair was fashioned high, with a veil covering it. She also ensured that there were mogra hair pieces woven in, since she loves the smell.

As the ceremony began, cousins walked down the aisle with their spouses, followed by the bridesmaids, who were holding ivory candle vases that held color-changing candles. Just before Aarti began her walk down the aisle, her cousins blew a conch, not just ushering auspicious omens, but also drawing all attention to the glamorous bride. The groom arrived on a carriage drawn by white horses, which are apparently the same ones used at Universal Studios.

As they took the seven momentous steps, pre-recorded wedding vows were played in the background. After the ceremony, vidai songs played, of which Aarti’s father selected them all. The bride and groom were ushered away later in a grand white hummer limousine.

The Rosen Centre was also the site of the reception, during which the venue was decked in crystal and shades of blue. A dance floor and tables along the side completed the decor. Memories of India provided the food, which combined Amit and Aarti’s favorites and other fusion cuisine. The tiers of the couple’s wedding cake were designed in different shapes, and decorated using colors from the theme and design from the bride’s outfit. There were several layers, each of which had a different flavor selected by the family. As favors, Aarti opted for damask photo coasters.

Now wiser and more experienced, Aarti advises brides and grooms to take it easy and ensure adequate planning. Regardless of the rush towards the end, all efforts will bear fruit. However, the most important thing is to enjoy every minute leading up to the wedding anwd even after. Going by what she has to say, Aarti and Amit look to have a great life ahead!

Getting Married? Now What?
A Match Arranged in Heaven – When Mohsin Wed Marium