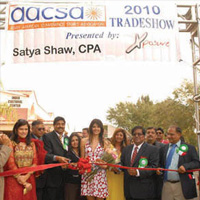 A precursor to this year’s holiday season, Tampa residents witnessed a day and night to remember as the Sixth Annual National Convention of the Asian American Convenience Store Owners Association (AACSA) held its Exhibition and Trade Expo and Gala Awards Banquet. The day events were marked with high level networking amongst store and business owners across the country, while the evening entertainment was full of excitement. “The Bollywood dance show featuring the gorgeous and talented actress and super model Pooja Batra, Fame Gurukul singer Shamit Tyagi, and Bollywood’s all blind musical group “Black,” had the crowd roaring,” AACSA Event Chairman, Vijay Gandhi announced.

Founded in 2004, AACSA (www.aacsa.org) is the apex body of the Asian American convenience stores owners in the US.  Over a thousand convenience store owners and operators from all across the United States attended the mega event to discuss the issues related to their business and welfare. The Hillsborough County Commission’s chairman Ken Hagan, was the chief guest of the event.  AACSA chairman Chandrakant Patel coordinated the educational symposium featuring NACS Vice President Mike Davis for information on crime and environmental problem prevention. “The well-attended event attracted a large number of vendors targeting convenience store owners,” AACSA Director, Sudhir Shah said.

A highlight of the convention was AACSA forming an alliance with the Coca-Cola Company and American Beverage Association to fight against the proposed Federal soft drink taxes of an extra one-cent an ounce to raise $156 billion dollars over six years.

Business owners and all those who attended the day long expo also enjoyed the evening filled with entertainment. “Tonight, as we celebrate the 6th Annual AACSA Convention, we hope to renew the spirit of our friendship and form an even stronger bond with our members. It is our privilege to bring convenience store owners, Physicians and political dignitaries together on a single platform,” Satya Shaw, AACSA President, said.

AACSA encourages all store owners and interested people to join them and become part of a growing association that can not only enhance their business on a daily basis but also make a huge difference in the community across the country.