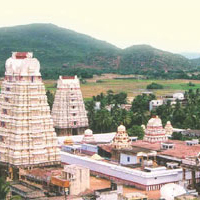 India offers a wide diversity in terms of places to visit, both for tourists as well as pilgrims. For thousands of years, various places of interest around the country have continued to mesmerize wanderers and compelled them to register their footfalls time and again in those venues. For religiously inclined Hindus, India has offerings galore. From Amarnath Cave and Gangotri in the North, Tirupati and Madurai in the South, Kalighat (Kolkata) and Puri in the East to Dwarka and Pushkar in the West, the options and choices can be more than a handful for the entire lifetime.

Based on the deity of worship or the relevance of place, several Indian pilgrim spots have been collectively described as Panch Kedar, Sapta Kedar, Pancha Prayag, Sapta Badri, and Chaar Dhaam. However, the last one is undoubtedly one of the most revered among the lot. Chaar Dhaam comprises of Puri (Orissa) in the East, Dwarka (Gujarat) in the West, Badrinath (Uttar Pradesh) in the North, and Rameshwaram (Tamil Nadu) in the South. It is said in the Purana scriptures that Lord Jagannath used to take bath in Badrinath, dress up in Dwarka, ate food in Puri and slept in Rameshwaram.

The sacredness of these four places is so powerful that millions of Hindus consider it to be the good deeds of their past lives if they happen to make a round of these Chaar Dhaam in their lifetime. As such, for a devout Hindu, a trip to the Chaar Dhaam should be an integral part of their itinerary in India. Bahuni Santi tirthani devi bhumo rasasu chal Badari sadrisya tirth na bhuta na bhavisyati …

The trip should begin from Badrinath Dhaam, which is located 322 miles from the national capital of Delhi. Badrinath is well connected to the capital as well as to other cities and towns in Uttar Pradesh by road. The nearest airport is Dehra Dun. Badri is open to pilgrims from May to November. During the rest of the year, the temperature nears subzero and is almost inaccessible to the civilians. Located at the confluence of Rishiganga and Alakananda Riv-ers, and at a height of 10,351 feet, Badrinath is encased within the snow-clad Nilkantha Peak in the background and between the Nar and Narayan Hills on the either sides. The main temple of Lord Badrivishal or Lord Vishnu was first constructed by Sankaracharya in the 8th century. Later the King of Garhwal and Queen of Indore made valuable contributions to the architecture and ornamentation of the temple. Devotees perform the sacred bath at the hot-water spring which is adjacent to the temple and embarks on the main complex. The four armed Lord Vishnu will be found seated in padmasana atop a high pedestal, decorated with expensive gems and jewelry. A golden umbrella is fixed above the head of the imposing deity. To the left of the idol are Narr and Narayan and on the right is Lord Kuber. A silver Garudh finds His place in front of the Lord. Goddess Lakhsmi is also present in the main temple complex.

Badrinath has always remained the focal point of many mythological stories and incidents, which has only contributed to its aura. Lodging options in Badri suits every budget, but probably the Garwal Mandal Vikash Nigam (GMVN) provides the best. Ayodhya, mathura, Maya, Kashi, Kanchi, Arambhika ! Puri, Dwarabati chaibya, saptayita Moksha dawika !!

Next up is Dwarka. Located at the westernmost point of India, in the state of Gujarat and kissing the Arabian Sea, Dwarka is known to be the gateway to eternal peace. This location is well connected to other parts of the state and the nation via, railand air. While the nearest airport is in Jamnagar nearly 84 miles away, railways are accessible en route to Okha. Dwarka is a highly revered Hindu pilgrimage. Mythologically regarded as the capital of Lord Krishna’s kingdom, the date of origin is traced to 1300 B.C. The main attraction is the Rannchodji temple at the heart of Dwarka and on the banks of River Gomti. The deity of the Lord is three and a half feet tall, made of blackstone, and is seated on a silver throne. The granite temple resembles a chariot and is 170 feet high. The peak of the temple has a golden kalash. The original temple of Lord Krishna at Dwarka is said to have sunk into the sea. Later, the sea was embanked and part of the temple was retrieved from the sea.

At the entrance of the main temple, one will find the idol of Mata Devaki, followed by Lord Ganesh at the gates, and then, Lord Shiva. The complex also houses several other smaller temples of various Hindu deities in a scattered form. The entire town of Dwarka is centered around the main temple complex. In a walled island within the River Gomti are the Krishna Mandir and the Gomti Devi Temple. Further down the way is the Narayan Sangam, where the Gomti River and the Arabian Sea meet as well as where one can visit the temple of Lord Sangam Narayan. Other temples worth mentioning in Dwarka are the Lakshminarayn Temple, Rukmini Temple, Bhadrakali Temple, and Siddhewswar Mahadeva Temple. The Rannchodji Temple and other main temples of Dwarka are only
accessible to Hindus and host attractive seasonal festivals, especially during Janmashtami, Basant Panchami, and Holi.

From the westernmost tip of the country, the next stop is at the southeastern fringe of the nation, Rameshwaram. This place is located in the state of Tamil Nadu and can be reached from Chennai by bus or train via an overnight journey. It is also connected to other parts of Tamil Nadu like Madurai, Kanya Kumari and Coimbatore by a network of buses and trains. Lodging options are available aplenty, though arrangements provided by the Temple committee are worth a mention.

Rameshwaram is one of the most important Vaishnav and Shaiva religious destinations. The main deity is Lord Ramnathswamy. Mythologically, it is believed that the deity was first established by Lord Rama on his return from Lanka. The present day temple is built on a 6-hectare piece of land, upon a high platform of 1200 pillars. It is one of the biggest temples of Southern India and made on Dravidian architecture. The construction of the temple is said to have started in the 12th century and ended in the 19th century. It also has the longest corridor of the world that stretches 1220 meters and has decorated ceilings and granite pillars. There are 21 tirtham or springs in and around the temple complex among which Agnitirtham is the enclosure of the sea adjacent to the temple.

Nearly 12 miles south of Rameshwaram is Dhanushkoti, the confluence of Indian Ocean with the Bay of Bengal. It is the
place where Lord Rama had built a bridge to link the main land with Lanka. One can peek into the temple of Kodandaramaswamy, where Lord Rama, Lakshman, Seeta, Hanuman, and Bibhisan are worshipped. The virtue of the visit to Rameshwaram is not complete without a trip to Dhanushkoti as the saying goes.

Finally, the travel cart comes to rest at the fourth and last of the Chaar Dhaam, the abode of Lord Jagannath, the sea side tourist haven of Puri. The attraction of Puri for the devotees as well as the tourists is eternal. Located on the shores of the Bay of Bengal, this place with its maritime climate is also a honeymoon hotspot. Often compared with Brighton for its marvelous sea beach, Puri has its own charm and is home of the Lord Jagannath Temple. Built in 1189 by Raja Anangabheemdev, the unique temple is an architectural beauty. It has four entrances, Sinhadwar, Ashwadwar, Hastidwar and Khanjadwar. A distinctive feature of this temple is the stellar presence of idols of all Hindu Gods and Goddesses within the same complex. The walls of the temples exhibit a high order of contemporary art, with murals and relief work displayed all over.

The main temple houses Lord Jagannath in a gem and stonecarved throne. He is flanked by fair-faced Lord Balaram and yellow- 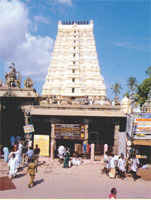 faced Subhadra. Goddess Lakshmi in gold is on the left side, while Goddess Saraswati in Silver is seated on the right. The main idol of Lord Jagannath, Balaram and sister Subhadra, is made of wood and it is said that this wood comes floating in the sea from Dwarka. A lot of beliefs and superstitions are associated with the construction of the wooden idol of these deities, and they have become folklore for all ages. Another very notable thing about the Lord Jagannath temple is the Annabhog, food offered to the Lord and later distributed as prasad. Everyday, 70 quintal of rice is cooked for providing this
food for at leats 10,000 devotees who throng to the temple. The food is cooked by 400 cooks.Any mention of Lord

Jagannatha and Puri cannot be complete without the rathayatra. Every year, in the month of July, Lord Jagannath travels to her aunt’s place (Gundichabari) riding a chariot, along with Lord Balaram and Subhadra in their respective chariots. This one mile journey is celebrated each year by millions of devotees who occupy every single inch of Puri during the ten day period. It is said that the one who manages to pull the rope of the chariot goes to heaven.

Puri is accessible from all parts of the country by rail, road and air (the nearest airport is Bhubaneswar, which is a two hour drive). Trains from places as far as Dwarka, Chennai, Delhi and Kolkata download hundreds of tourists and devotees every day to this cool sea-side temple town. Lodging options are galore including plush beach resorts and fivestar hotels as well as budget hotels. For an ardent Hindu, a visit to the Chaar Dhaam will not only satisfy his tryst with spirituality, but also enable a mini-Bharat Darshan, touching the four corners of the country at one go. So, an invite is extended for the eager traveler, one who would like to satisfy their explorative side while also gaining some spiritual fruit, to make certain that their next trip to India includes a visit to the Chaar Dhaams.