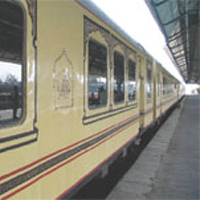 Travel to India: Palace on Wheels 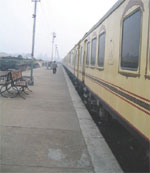 independent, princely states of erstwhile India. The lure of this extravagance had attracted several thousands over the ages. While much of the aura of the royalty has been lost, particularly since India gained independence, the stories of the days of yore and the remnants of lavishness can still be seen. This very fact means that all things royal still remain stellar attractions for any tourist traveling to India. In the days before independence, Kings and rulers of various princely states used to travel by their own personal railway coaches that were no less than a self-sufficient palace. These coaches were self-sustainable and included all the possible amenities a Royal would need and could enjoy during the journey. The users of such coaches included rulers of the princely states of Gujarat and Rajputana, the Viceroy of British India, and the Nizam of Hyderabad.

After independence, these coaches were no longer used. In 1982, Rajasthan Tourism Development Corporation, Indian Railways, the Tourism Department of Rajasthan, and the Government of India launched a special heritage tourist train to provide a unique and memorable experience to tourists visiting Rajasthan. Hence, the Palace on Wheels was born, as a form of luxury travel. The name Palace on Wheels was derived from the use of coaches by royals in the past. Gradually the Rajasthan state government and railway department made many infrastructural changes to the coaches to keep the same aesthetics of the interiors alive, and to match the interiors of the royal state.

Finally, the outcome was a seven day travel package starting from Delhi and running into the heart of majestic Rajasthan all the while on board a train that is synonymous with the epitome of luxury. Palace on Wheels maintains an imperial style and décor and takes tourists on a vibrant journey to the royal land of sand dunes and regal palaces. It is the fifth most luxurious train in the world, and it carries with it an intrinsic ambience that goes perfectly well with the majestic charm and beauty spread so lavishly all over Rajasthan.

For any person traveling on this majestic train, the journey is full of exuberance and a luxurious feeling. It gives one the perfect chance to relive an era when kings and queens ruled, when royalty spelt magic, and when charm and mysticism was in air. It is as if, the passenger himself is a Maharaja traveling in his personal saloon, accompanied by all the pomp and grandeur generally associated with the royals.

The train and the facilities on board the train are marked by affluence and exuberance. The train is self-sufficient with all modern 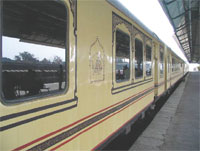 amenities. However, the décor speaks of the culturally rich past of Rajasthan. The paintings, carved furniture, and elegant handicrafts all represent Rajasthan’s fascinating heritage of art and craftsmanship. Period furniture and the elaborate costumes of the attendants contribute to the royal ambience. The train has 14 fully air-conditioned deluxe saloons, each a combination of four twin bedded chambers with channel music, intercom, attached toilets, running hot and cold water, wall to wall carpeting, and other amenities. The saloon coaches are named after 14 princely states of Rajasthan: Jaipur, Jodhpur,Alwar, Bundi, Kota, Jhalawar, Dungarpur, Dholpur, Bharatpur, Jaisalmer, Sirohi, Bikaner, Udaipur, and Kishangarh. Each saloon is different, but care was taken to ensure the overall ambience of the décor of the saloons provides continuity and harmony. Each saloon has a creamy yellow color on its exterior walls and bears the Coat of Arms (logo) of the erstwhile princely states. Every coach has a special attendant or “Khidmatgaar” dressed in traditional Rajasthani attire to take care of every need of the distinguished passengers.

Apart from the saloon coaches, the Palace on Wheels has two restaurants offering traditional Indian, Continental, and Chinese cuisine with the Chef’s special variety of the day. A well-stocked bar serves Indian liquor and a variety of scotch, wine and cocktails. It has channel music in every saloon as well as interesting games for children. The train also provides other value-added services on request such as laundry services, a doctor on call at each station, barber shop, and beauty parlor. The Bar and lounge also has a souvenir shop where souvenirs and gift items are sold bearing the insignia of the Palace on
Wheels.

However, the train itself is not the only piece of this exquisite and extravagant package. The actual journey through the heartland of the Royals speaks for itself. It is a passage that one can experience only once in a lifetime, as the super luxury train chugs on, regaling the passengers on board about a splendid and enchanting royal journey through the bygone era of the erstwhile Maharajas.

Typically, the train departs every Wednesday at 5:45 in the evening from Safdarjung Railway Station of New Delhi for a ‘journey of a lifetime.’ The next day, early in the morning, the train stops at Jaipur, where the guests are served breakfast. Later in the day, the guests are taken in an airconditioned coach for a city sightseeing trip: first to Hawa Mahaal and then to Amber Fort, where the fun elephant rides are also offered. After a mid-day break for lunch, the afternoon is spent visiting the City Palace as well as the Jantar Mantar or the Royal Observatory. In the late evening, the tourists return to the train, which subsequently departs for Jaisalmer.

The golden city of Jailsalmer is the next destination on the third day of travel. After an on-board breakfast, the guests are taken for

a city tour, where among others the main attraction are the Jaisalmer Fort made of yellow sandstone and the unique havelis or mansions of the city’s rich and the famous of the city, which are characterized by painstakingly latticed windows. After an onboard lunch, the evening is spent visiting the Sam Sand Dunes on the outskirts of Jailsalmer, accompanied by a Camel Safari Ride and then, dinner at a City hotel amidst a local cultural extravaganza. After another hectic day, the train rolls on towards Jodhpur with tired, but happy passengers on board. Sight seeing at the blue city of Jodhpur is restricted to a half-day tour the next day where Meherangarh Fort, Jaswant Thada and Umaid Bhawan palace are shown before the Palace on Wheels chugs on to its next destination, which is Sawai Madhopur after lunch time.

On the fifth day, the train arrives at Sawai Madhopur, which is the gateway to Ranthambore National Park. An early morning visit to this highly acclaimed tiger reserve is conducted in open air Canter Trailer trucks where the guests are given an opportunity to witness the natural beauty of this area, along with a wide range of wildlife that includes tigers, hyenas, nilgais, wild boar, foxes and over three hundred species of birds. After breakfast, the entourage leaves for Chittaurgarh, and the evening is spent sight seeing at the legendary fort of Chittaur. This fort was the abode of passionate men and women whose courage and dignity have become folklore. The main destinations to visit are Queen Padmini’s Palace, Vijay Stambh (Tower of Victory) and the Kirti Stambh (Tower of Fame). After the visit at Chittaur, the next destination is Udaipur.

Udaipur, also known as the Venice of the East, has attracted tourists from all corners of the world leveraging its mystique fortresses, gigantic palaces, sandy terrains, and serene lakes. Passengers on board the Palace on Wheels experience experience this charming city through well-organized, conducted tours for the greater part of the sixth day. Later in the evening, the train moves on towards Bharatpur, with awestruck passengers on board, all of whom are probably finding this hirlwind tour of Rajasthan too difficult to savour in such a short period of time.

At Bharatpur, the primary destination is the Keoladeo Ghana National Park, which is the home to a large variety of exotic birds that come from Siberia and China. The guests are given a wholesome dose of the rich natural resources of India in this bird sanctuary. In the afternoon, the Palace on Wheels moves on to the city that is home to the Taj Mahal, Agra. Most of the day is spent visiting the epitome of Love (the Taj Mahal), Agra Fort, and nearby monuments. It goes without saying that after a mesmerizing trip that lasts over seven days, the culminating visit to the Taj serves as decadent icing on a cake.

As all good things do have to come to an end, the very next morning the train returns to its origin point, Safdarjung Railway Station in Delhi, where after an early breakfast, the tour officially ends. However, it is probably safe to say that the Palace on Wheels tour package embosses such a vivid memory in the minds of the travelers that the after-effect stays on to pleasure them, probably for the rest of their lives.

There is no doubt that the cost of such an exquisite and memorable package tour will be a bit expensive, and it will depend on the type of occupancy chosen. However, for every passenger who has been on board this luxurious royal train, the satisfaction outweighs feeling the pinch in your wallet.

Palace on Wheels is indeed a star attraction for every visiting tourist to India, and it would not be an exaggeration to say that if you need to travel in India the way Indian Kings did, Palace on Wheels is a must. The ambience, décor, opulence, extravagance, service and to top it all, the breathtaking journey into the land of the Rajas, are certainly worth a look.