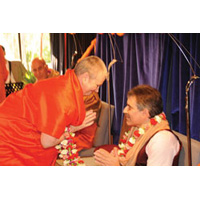 In earlier issues, we featured winning essays of the Hindu American Foundation’s NextGen Essay Contest. This month, we share an essay by Sarika Persaud, a student at St. John’s University in New York and the second prize winner in the 18 – 22 year category.

Though America is conventionally seen as a country whose ideals are based on Abrahamic values, one can easily see how seamlessly the values of Sanatan Dharma, or Hinduism, compliment traditional American values. From my own experience, I have observed how Sanatan Dharma and the idea of being an American not only flatter one another, but create a larger sense of purposeful direction within the individual.

“Santan” means eternal, and dharma means duty or purpose; thus, Sanatan Dharma is a way of life, older than time itself, that directs one toward fulfilling their true potential. However, Sanatan Dharma does not outline only “one way” for one to find their purpose in the world. There are billions of directions one can take toward fulfilling their dharma. Each of us has a purpose to fulfill, and thus, a unique path. What is right for one person may not be right for another. Similarly, one of the reasons that people from around the world come to live in America is because of the wide variety of opportunities available to them. They are not bound to a certain career by their government or family – they are completely free to discover their own path.

The very nature of Sanatan Dharma is limitlessness. Similarly, freedom to fulfill one’s dharma in any way they are directed to is a basic American ideal. In this way, one is also free to explore any way that they choose to create their identity. In fact, this has lead to a rather pliable definition of the prototypical “American”. The average American to someone from New York City is vastly different from the average American from the perspective of someone from Houston. Similarly, there is no strict definition of who a “Hindu” is. While it is true that most people who identify as Hindus may adhere to some common beliefs, it is not necessarily true that all Hindus believe the same thing. In fact, Sanatan Dharma is a religion of incredible multiplicity in practices and philosophies. There is no strict dogma or ultimate “set of rules”. The definition of a Hindu is usually cited as “one who believes and practices the teachings of the Vedas,” but there is no set requirement of which beliefs are adhered to, or even how many one must accept.

The definition of what it means to be an American is just as delightfully ambiguous. To limit the definition of “American” to “one who lives in America” seems sophomoric; there is a greater spirit of strength, egalitarianism, and liberty that one identifies with America. One cannot even identify an American as one who believes and follows the laws set in the constitution – is, then, a criminal not an American? What about those who do not believe in freedom of speech? While there is a sort of national character one can identify with America, and there are certain purposes one can identify with Sanatan Dharma, neither delineates one binding set of identifying characteristics for the individual. While we all have roles that we identify with, (e.g. student, mother, sister, friend, husband) our true identity is something beyond these roles. To the Hindu, who we really are is something greater, something universally encompassing. Beneath our self-judgments and perceived roles is something more permanent and universal. Thus, one’s true identity is boundless. We can take on an infinite amount of functions, as we are capable of an infinite amount of things. However, in a more absolute sense, we are beyond the constraints of all of these roles.

This points to a core unifying principle of Sanatan Dharma – the essential oneness of all things. “There is on Earth no diversity…As a unity only is it to be looked upon – this indemonstrable, enduring Being.” (Brihad-Aranyaka Upanishad, 4.4.19-20) While from a worldly standpoint, we all come from different backgrounds, families, economic statuses, and religions, essentially, we are all one. Physically, we are all composed of the same subatomic particles, held in existence by the same energy. And at the deepest level, there is no diversity – only smooth, peaceful, sameness. Within all of us is this proclivity towards unity and balance. This what Hindus identify as God: the deepest essence of our being that unites us all. This is where sacredness is found in all things, where divinity lies in the magnificent and the insignificant. Not only is every creature seen as sacred – every moment is sacred, and is worth our full awareness, presence, and attention.

Here, in the profound spirituality of Hinduism, is a clear representation American culture: diversity in the context of unity. While America is home to people whose roots are from countries around the world, there is still one overarching

sense of belonging that melds all people together under the identity of “American”. By the same philosophy, and from an even larger perspective, the Hindu is one who believes that beyond all notions of national and personal identity, we are all one; our innate infinite nature lends itself to a destruction of the concept of “you” and “I”. A deep understanding of Hinduism lends one to find a greater value in their own sense of purpose, regardless of whether they identify as a Hindu or not. An American sees their own face reflected in their neighbor’s countenance, sees their own success in their country’s success. Thus, by recognizing our innate unity, one can see the importance of truly American values of respect, equality, and freedom.

While preserving a sense of national and personal identity is important in both Hinduism and “Americanism”, there is an ultimate sense of oneness across all people that both recognize. By accepting the Hindu belief of absolute unity, we are accepting and adhering to the basic American idea that all people are “equally free,” and deserve to fulfill their life’s purpose in whichever way they so choose. In this way, American society becomes a satsang for the Hindu – it is a place where one is allowed to discover their dharma in an environment of unconditional acceptance.

About Sarika
Sarika Persaud is a twenty-year old student pursuing her BA in Psychology, with minors in Art and Physics, at St. John’s University (NY). She is the Educational Resources Coordinator for HSC (Hindu Students Council), and is also involved with CHY (Coalition of Hindu Youth). Sarika has also been a teacher at the Hindu children’s education program at her temple, Shri Surya Narayan Mandir, for five years.