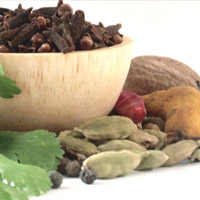 THE HEALING POWEAR OF CURRY

One of India’s biggest gifts to the West has indeed been the famous dish known as curry. There are still doubts and debates go ingon as to the whereabouts of itsactual origin as well as who invented curry. In the end, none could disregard thelips macking taste of this spicyde light. Traditionally speaking, curry is a dish containing sautéed garlic, onions, andvarying amounts of spices suchas turmeric, cumin, coriander, ginger, red chili powder, cardamom, black pepper, cloves, fenugreek, and fennel

Notwithstanding the food value of this typically Indian dish, the biggest draw of curry these days is its medicinal values .In fact, each ingredient has been used for thousands of years to treat a variety of ailments from stomach cramps to throat infections.

To begin with, in the days of yore when refrigeration did not exist, curry was put on meats as a natural preservative, as it possesses bacteria-killing properties. Curry is also said to boost brain functioning, espe

Cially by clearing up Amyloid plaques that are found in the brains of the victims of Alzheimer’s disease. The tasty dish is also believed to prevent chronic disease like rheumatoid arthritis and osteoporosis. Often, it has been found in the effective cure of prolonged sinusitis and lung congestion as well as in fighting infections. Though it may sound somewhat unbelievable and unrealistic, when it comes to the multiple benefits that curry can provide, an analysis of is ingredients will clearly justify its claim. Take for instance one of its major component, garlic, which once was used to treat fungal, yeast, bacterial, and viral infections, is now used to lower cholesterol and as an antibiotic. Onion also has similar medicinal qualities, and in fact, it is very useful in treating lung congestions. 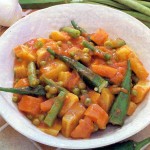 Among the concoction of spices present in curry, a notable one is cumin, which aids digestion and also relieves flatulence, colic, and diarrhea. The root, seed, and leaf of coriander are often added to curries. This herb has often been used to ease migraines and for gastro-intestinal issues. Ginger has the ability to suppress nausea and often proved to be more effective than anti-nausea medications. Ginger has also been used to treat indigestion and flatulence and to reduce fever. The spiciness of curries can be attributed to the red chili present, which acts as a pain reliever as well as an aid to increase circulation.

ardamom, when used in curries, not only lends a sweet flavor to these dishes, but it also has the ability to stimulate digestion and can aid fatigue and fever. Black pepper stimulates gastric flow, acts as an anti-bacterial agent, and helps relieve headaches and diarrhea. Without any doubt, one could state that the very favorite, palatable curry not only stimulates our taste buds, but also provides immense medicinal value to our body system. Cloves have been used to keep fats from turning rancid and to preserve foods. Medicinally, cloves act as a topical pain reliever. Fenugreek helps to relieve digestive cramps, menstrual pain, and as a fever reducer. Fenugreek seeds have the unique ability to stimulate breast tissue to lactate while fennel, though used in small quantity in curries, does allay hunger pain, ease indigestion, and as a diuretic.

It could be said that the maximum benefit of curry is derived from the spice that gives it a yellow color – turmeric. Curcumin, the main active ingredient in turmeric, has been found to help combat breast cancer, colon cancer, stomach cancer, and even blood cancer. In fact, turmeric has been used traditionally in Ayurvedic Indian medicine to improve overall health by naturally treating arthritis, inflammation, and even digestion. Curcumin also plays an active role in the treatment and prevention of multiple sclerosis and Alzheimer’s disease.

Without any doubt, one could state that the very favorite, palatable curry not only stimulates our taste buds, but also provides immense medicinal value to our body system. Indeed, the cure to so many of our diseases lies just in front of us on our dinner plates!