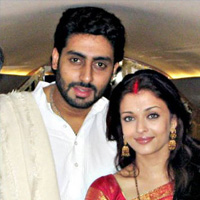 The Wedding that Surpassed Fantasy

Yes, we are talking about the marriage of Abhishek Bachchan and Aishwarya Rai, both celebrities in their own rights. On one hand, we have Abhishek, a star and a heartthrob for million of Indians and the darling son of the first couple of Bollywood (Amitabh and Jaya Bachchan). On the other, we have Aishwarya, a former Miss World and a leading heroine in Indian and Hollywood films. The union could be no less than a merger fantasy and now it is reality.

However, the road to this point was not rosy as it would have been. Scores of newsprint has been spent describing the astrological problems that Aishwarya had by virtue of being a “Manglik” and the manner in which she (along with the Bachchans) visited temples all over the country to perform ‘yagnas’ and ‘pujas’ to negate the ill-effect. It has even been reported that Aishwarya had to undergo a symbolic marriage with a tree just for this sake.

As time drew near the date of marriage, April 20, the media frenzy hit an all time high. All over, expectations began to rise and there was a lot of speculation about the process of marriage, modalities, invitees, and even the wedding dress. Certainly, if the marriage is between the most eligible bachelor of Bollywood and the blue-eyed beauty queen, there has to be a lot of interest. But, the way this marriage generated coverage is probably unprecedented in the national context.

A few days before the actual event, news channels set up their camps near the venue, which happened to be Amitabh’s two bungalows, Jalsa and Prateeksha. The latter was the site of wedding, where the actual marriage ceremony took place. This was done as Aishwarya resides in an apartment La Mere, which might not be the most suitable venue to accommodate the VVIP list of guests. But, that did not deter media to hound the apartment as well. Such was the importance of this event to the media that they tried to interview almost every person coming out of the three different places, Jalsa, Prateeksha and La Mere.

The families of Bachchans and Rai exercised extreme caution regarding access to the event by the press and other unauthorized persons. The Bachchans ensured that by no means could the media get a peek at the marriage venues, its decoration, and other preparations.

The mega-marriage finally began on the April 18 with the “Sangeet” ceremony at Jalsa. The invitee list included a who’s who list of popular Indians. It included Ram Gopal Verma, Suniel Shetty, Ajay Devgan and Kajol, Sanjay Dutt, Karan Johar, Rishi Kapoor, Aman Ali and Ayan Ali Bangash, Udhbhab Thakre, and Preeti Zinta. Family friends included Amar Singh, Anil Ambani, Anupam Kher, Goldie Behl, and Sonali Bendre. It was reported that the nightlong program of dance and music was choreographed by Karan Johar and all the participants were made to dance. The bride and the groom delivered an encore of their famous “Kajra Re” number, and mother, Jaya Bachchan, ignited the show by dancing to the tunes of sensuous “Biri jalai le”. Aishwarya and other guests left Jalsa at around 4am all the while keeping weary-eyed media people again at bay.

The next day was the “Mehendi:” ceremony, which took place at Ash’s maternal home, La Mere. It was an entirely cozy function organized by the Rai family. The compound had a festive atmosphere with lights and music everywhere. The Bachchans went to the place with mehendi from Rajasthan, and the word is that mother-in-law Jaya Bachchan herself applied the colors to Aishwarya’s hands.

The day of the marriage was truly an event to remember. All through the night, Indians from Kashmir to Kanyakumari, Dwarka to Dispur could only see the gates of the Bachchans’ bungalows (as the media could not see anything beyond that) and were hearing running commentary of what was probably going on inside. It was indeed a unique situation, where all information procured was ‘source based’ as no one knew exactly what happened inside.

It was around 5.30 am in the morning that priests from Varanasi and Jabbalpur conducted rituals at Jalsa. Until noon, one could see a flurry of activities at both bungalows related to the organisation of the gala event. The media tried to capture every single second of the preparation to pass it to their viewers. One could see Amar Singh and Amitabh Bachchan coming in and out of the bungalow while supervising the different arrangements.

The beautiful bride appeared at Prateeksha at 1:30 pm with a convoy of seven to eight cars. Aishwarya, dressed in a red Kanjeevaram saree, entered the bungalow in a silver Mercedes car ornated with pink and white flowers, and accompanied by her mother Brinda Rai.

The guests started to pour in by the evening. The main congregation of guests was at the Bachchan residence at Jalsa. Friends included Riteish Deshmukh, Yash Chopra with family, Karan Johar with family, Rakeysh Mehra, Amar Singh, Ajitabh Bachchan, Suneil Shetty and Sanjay Dutt. The Baraatis began to move towards the place of marriage, Prateeksha, boarding five Volvo buses. Abhishek came to the bus, riding on a white horse, and he was dressed in an Abu Jani-Sandeep Khosla designed Sherwani decorated with gold threads. Visibly elated Abhishek was seen to wave towards the media and his fans who gathered in thousands in front of the house. The entourage of buses then made its trip to the Prateeksha with the groom Abhishek and of course, Amitabh.

At the gates of Prateeksha, one could see an ecstatic Abhishek jumping from the bus and dancing away to a waiting horse. In fact, the groom to be was so happy that he continued to dance while sitting on the horse as he rode inside the marriage venue. The entire activity was closely supervised by Amitabhj Bachchan, who played the role of the Father of the Groom to the core. Abhishek’s mother Jaya Bachchan and sister Sweta Nanda were also seen joining the fun and frolic that accompanied.
The marriage was finally solemnized in the late evening between 6 to 7pm. It has been heard that the marriage was conducted through a series of North Indian, South Indian and Bengali rituals, as the bride is South Indian, the groom from North India, and the Groom’s mother (Jaya) from Bengal.

After the marriage, the reception took place where among others, one could find Sachin Tendulkar, Mulayam Singh Yadav, Bal Thakre, Saharashree Subrata Ray and a host of other celebrities. The approximate number of invitees was around 250-300, and there were 800 security personnel, who tried to manage the event. However, they could hardly do a decent job as thousands of curious onlookers literally mobbed the area. Some came from as far as Mangalore and Hyderabad.
At the reception, choreographer Shiamak Davar performed a special dance program while the catering was carried out by the Taj Mahal Palace Hotel. The platter was predominantly Indian vegetarian cuisine apart from Russian, Thai and Mexican dishes. After the wedding, the next day was the “Bidaai” of Aishwarya.

However, as good things have a dark side, this marriage of the year was not devoid of controversy. The media attention it generated had really caused many raised eyebrows, and put the Bachchans invitation practices were put on display. This marriage was said to be such an event, and many pretended that they were invited, when they actually were not. Quite surprisingly, the invitee list did not include some very obvious names from the Bollywood film industry that gave Amitabh Bachchan his iconic stature.

Discontentment among several producers, directors, actors and actresses grew when they were reportedly told that the invitee list was allegedly monitored by Amitabh’s friend, politician Amar Singh, and was opportunistically made. Many close friends of the senior and junior couple were notably left out.

To make matters worse, treatment of security personnel towards the media and the on-lookers was violent at times. The treatment was so violent that later Amitabh Bachchan himself had to apologize for incidents. And then, there was the suicide attempt, where an unknown starlet named Jahnavi Kapoor made an attempt to take her life claiming to be Abhishek’s wedded wife. Though the incident could not gather much momentum, yet left a sour taste on the otherwise happy event. Later, rumors were also rife about Amitabhj having sold the media rights of the marriage to British television and hence debarred the national media from gaining any access.

After the wedding, and after taking the blessings of Lord Balaji Tirupati, the newly wed couple of Abhishek and Aishwarya Bachchan left for the French Riviera for their honeymoon. Let’s hope that the duo now enjoys a long and happily married life, while the media takes a break from their grueling work in covering this momentous event!