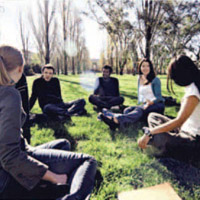 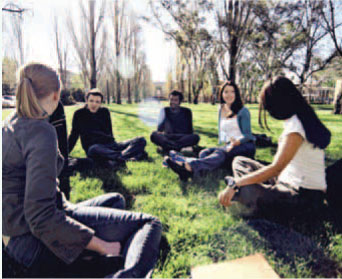 After 45 years, I returned to my ancestral village of Bantwal, near Mangalore in Karnataka, for a stay of more than two months.  It is a typical rural town, surrounded by small villages dependent upon farming and beedi-rolling.  In this town is a five-year degree college with 1,000 students. Most of them are first generation literates.  A large percentage (99 percent) is not accustomed to reading books other than textbooks, despite the college having a good collection.  These students, for several reasons, are also not accustomed or allowed to ask questions, as in many other colleges.  Because of the well-critiqued education system of ours, they are also not encouraged to think and develop their own solutions to any problems.  They are not encouraged to offer their comments.  To bring about some change in this rigid and learning-unfriendly environment, I experimented with a seminar series called “True Education” during my stay.  The seminars, held between June and July at S.V.S. College, were a great success.

I conducted 19 sessions with a group of 20 students.  Nineteen of the participants were young women.  We limited the participation so that everyone could be given personal attention.  All of them turned up regularly even though none of the topics would help them score more marks. None of the students could relax or daydream since everyone had to either ask a question or comment on topics of wide-ranging interest.  I noticed a remarkable improvement during a short span.  Students who were hesitant to speak up before the beginning of the seminar series were completely transformed, and by the end of the sessions there was not enough time to respond to all of their questions.

The topics covered included:  philosophy of writer Jiddu Krishnamurthy; the NGO movement in India; world and Indian history; India’s energy crisis; communism, socialism and capitalism; holding a mirror up to Indian society; politics and corruption; major world conflicts; citizen responsibility; reservation; the status of education; management principles; the world’s religions; science, superstition and modern gurus; energy and environment; reasons for India remaining poor even after 60 years of independence; liberalization, privatization and globalization; and critical factors for India’s development.  I spent just 15 minutes at the beginning of each session introducing the topic.  The remaining 75 minutes were spent on questions and answers.

During the valedictory, every student made a short presentation on what they got out of this seminar series.  Everyone wanted this experiment repeated for the benefit of other students who missed the opportunity.  One said that he learnt more during these 19 sessions than he had during his entire 15 years of education.  Many young women mentioned that they had started reading newspapers critically.  Many talked about the courage they had acquired as a result of their participation to ask questions not only in the classroom but also in government offices.  All had determined to take up some civic cause to fight against, like untouchability, casteism, the dowry system, gender bias, child labor, plastic menace, water harvesting, tree planting, and improving the local hospital.

Some teachers who observed the program in action wondered how they would complete the syllabus if students started asking questions as a result of this program.  On the other hand, others were happy that some of the students had already started asking questions and were taking a greater part in classroom discussions.  Two of the women participants spoke at the valedictory about how they objected when they saw an underage boy serving coffee at a meeting.  But for these seminars, they said, they would never have observed such things and also would never have had the courage to point out such unlawful acts.

Five more colleges from the towns of Mulki, Udupi, Kundapur, Moodabidri, and Karkal have already come forward to implement this program. There is hardly any cost involved, nor is prior permission required from the government.  Through this program, we can encourage students to develop independent thinking and critical questioning abilities, without having to wait for our political class to take the necessary steps to change the education system. What we need are a few, just one or two per college, committed teachers to get involved.  Every well-informed and concerned educationist can join this effort either as a facilitator of the seminar series or by sponsoring someone to conduct them if they themselves are unable to do so.