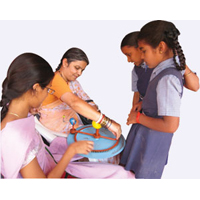 Words to live by

Valunteer in India
Right outside my window, I could hear the waves crashing against Chowpatty Beach and the bells ringing at Maha Laxmi temple. I sat in a room with no air-conditioning, tying knots onto the ends of rope pieces as the students I was working with strung beads and passed them to me. At a table across the room, another teacher supervised a different group of students as they built rangolis which would eventually be sold. I was working at the Shraddha Charitable Trust, a workshop for the autistic and mentally challenged.

The school was started in 1997 by Dr. Radhika Khanna, who is also currently the vice-president of SPJ Sadhana School for the Autistic Impairment in Mumbai. The school, which was originally started in the garage of one of the students, now accommodates over 40 young adults each of whom is trained in various jobs including molding, plastering, pressing and folding. The students create many gorgeous products such as incense stands, hand bags, hand-painted envelopes and much more. The school tries to be as eco-friendly as possible using materials such as recycled paper and pressed leafs in their works whenever possible. All of the products which these students create are packaged and sold in the sales room of the school to local Mumbaites and international customers.

While drudging away at these seemingly mundane chores, I learned something from the students at Shraddha. These autistic adults, from an outsider’s perspective, had nothing: no education, no social life, and no future. But after spending just my first day with them I realized that they had something that was much more valuable, something that most of us, even with our cars and degrees, do not have. They had happiness – a desire to live every day. Mayuri, with his love of music, was one young man who really made an impact on me. I swear this boy knew every single song on the radio, word for word. The joy he felt while listening to music was infectious. He inspired me to appreciate even the tiniest things in life.

These young adults inspired me to take action: if they can work this hard even with their mental disabilities than I have no excuse for being lazy. None of us do.

Like the Shraddha School, there are many foundations at which you can volunteer your time to or donate your money to such as Action for Autism (AFA) in corporation with the National Centre for Autism in New Delhi or closer to home, the Children’s Home Society of South Florida. The latter actually tries to help all children, not just those suffering from mental or physical disabilities. It is really easy to put our hands up and say that there is nowhere to help out at and no one who needs the help. But with just a little effort and time, we can bring great happiness to another human being who is not as lucky as most of us are.

Katyayani Jhaveri is an upcoming senior at Spanish River High School. She is an avid reader and loves to write. She has spent two years writing for her school’s newspaper and was the Student Life editor during her junior year. She has been learning Bharatnatyam for the past eight years.