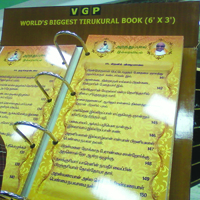 Words to Live By…

Hindu scripture consists of volumes of books written over thousands of years. Among these written works are the Bhagavad Gita, four Vedas: Rigveda, Yajurveda, Samaveda and Atharvaveda, and Upanishads, all of which are the most read and quoted when discussing Hindu scriptures.

In this month’s Word to Live By column, I would like to highlight a Hindu Scripture that is full of knowledge, but not as popular as other Hindu texts. This lesser known Hindu scripture is Thirukkural, also known as Thiruvalluvar. 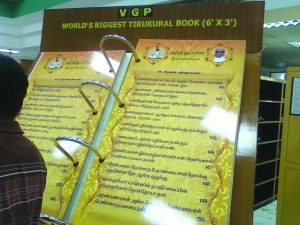 Thirukkural literature belongs to the Sangam period, the period of history of ancient Tamil Nadu, Kerala and parts of Sri Lanka spanning from the 3rd century BCE (Before Common Era) to the 3rd century CE (Common Era). Thirukkural is not the original name of this work and is made of couplet style poems originally written in Tamil before being translated in many languages. To honor the origins, the prefix thiru refers to respect in Tamil, and kural means couplet – together the name for the text Thirukkural emerged. Researchers claim that the work discovered is just a part of a much larger one, the discovered work consists of 1330 couplets. The author’s name is not known yet, but based on available information found so far, it is possible that a person who belonged to the Valluva tradition may be the author. Thus, the name Thiruvalluvar emerged.

Thirukkural consists of three categories, Ethics, Wealth and Love. Each category has multiple sections, and within each section are several chapters. Every chapter includes 10 couplets, each of which is two lines. The first line of the couplet has 4 words, and the second line has 3 words.

Thirukkural is all about how to lead a righteous life, and the text covers the complete spectrum of life in a concise manner. Thirukkural is like a pharmacy, you will have the medicine needed to cure illness, but can also be deadly if not consumed as prescribed. Take the medicine based on your situation or needs.

The next few issues of Desh-Videsh will feature a few couplets from Thirukkural that talk about the most important virtues in life such as friendship, loyalty, and love among others that lead to a righteous life. The series begins with one of the most important qualities every human being needs for success in life – perseverance. Six couplets from Chapter 6 of the text highlight this quality, and each couplet is listed in Sanskrit, Hindi and an English translation.

Never say in weakness, “This task is too difficult.” Perseverance will confer the ability to accomplish it. Do not give up saying “It is impossible.” Effort will overcome.

Beware of leaving any work undone, remembering that the world abandons those who abandon their work unfinished. Leave no task incomplete, for the world gives up those who give up.

The pride of profuse giving dwells only with the dignity of diligent effort. The pride of being a philanthropist belongs to those who have that quality called perseverance.

Like the swordsmanship of an effeminate man, the philanthropy of those who avoid hard work will end in failure. The liberality of the indolent man will not endure, like a sword in eunuch’s hand.

Standing like a pillar, he who prefers work to pleasure supports his family and sweeps away their every sad sorrow. A pillar of comfort to his friends is he who scorns delight and loves labor.

Perseverance generates prosperity, and the lack of it engenders poverty. Exertion leads to wealth; Lack of it brings forth poverty

one of the oldest Hindi scriptures

Vajpayee: The Years That Changed India
A Garland of Forgotten Goddesses: Tales of the Feminine Divine from India and Beyond