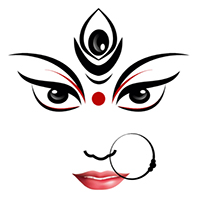 Words to Live By: Women in Hindu Scriptures

“Hinduism has the strongest presence of the divine feminine among major world religions, from ancient times to the present” says Edwin Bryant, an American Indologist and professor of Religions of India at Rutgers University.

The goddess is viewed as central in Shakti and Shiva Hindu traditions. Matriarchal theology is quite prevalent in Sanskritic traditions and village Hinduism relating to the worship of Shakti, and there are numerous Hindu communities that are matriarchal.

June McDaniel, Professor of Religious Studies and Director of the Religious Studies Program at the College of Charleston states, “The Devi Sukta ideas of the Rigveda are further developed in the relatively later composed Shakta Upanishads where the Devi asserts that she is Brahman, from her arise Prakṛti (matter) and Purusha (consciousness), she is bliss and non-bliss, the Vedas and what is different from it, the born and the unborn, and the feminine is thus all of the universe. She is presented as all the five elements, as well as all that is different from these elements, what is above, what is below, what is around, and thus the universe in its entirety.”

Maharshi Manu is the first great man of the world to have given society the highest ideals about women, which adds remarkably to the dignity, status and self respect of women. Maharishi Manu speaks wisely and offers noble ideas about women and womanhood. Whatever misquotes we come across against women citing the Manusmriti are from an adulterated portion of the ancient text.

Here are two famous quotes among many respecting the women in Manusmriti.

The divine are extremely happy where women are respected;
where they are not, all actions are fruitless.

It means that women bring good luck to a household through procreation; they deserve respect and reverence; they irradiate the house with their presence. In fact there is no difference between the goddess of wealth and women.

Ancient texts of Hinduism expound a reverence for the feminine. The Rigveda, for example, asserts the feminine to be the supreme principle behind all of cosmos through the following slokas:

May you be empress and lead all.

O brilliant woman, remove ignorance with your bright intellect and provide bliss to all.

O woman, you are the motherly force that provides direction to our life.

The way a powerful river breaks down even the strongest rocks and hills, in the same manner an intelligent woman destroys the fraud propagated by perverted ones. May we bow to such intelligent women.

This philosophy is also found in the Yajurveda, the Atharva Veda, Tripuratapani Upanishad and the Bahvricha Upanishad.

O woman, may you be strong and powerful like a rock. May you gain the brilliance of the sun and have a long prosperous life that benefits all.

O woman, realize your potential. You are a lioness who can destroy criminals, ignorance and vices and protect the noble ones.

O woman, you provide bliss and stability to the world. You are a source of valour.

O woman, you are as strong as earth and are on a very high pedestal. Protect the world from path of vices and violence.

O woman, you do not deserve to be defeated by challenges. You can defeat the mightiest challenge. Defeat the enemies and their armies. You have valour of thousands. Please us all.

May the scholarly woman purify our lives with her knowledge, noble actions and guidance.

Noble woman motivates us to be on the path of truth, love and harmony.

Whenever I am hurt emotionally or physically, women – as a mother, wife, sister etc – provides healing touch and rejuvenates me. I bow in humble respect to her.