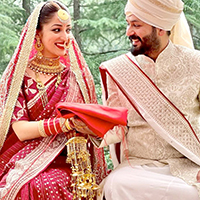 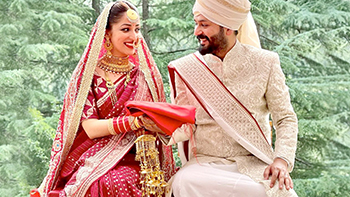 The Vicky Donor heroine, beautiful Yami Gautam, surprised her fans with the announcement of her marriage to director Aditya Dhar in an intimate ceremony attended by close family members. They tied the knot on June 4 and posted the pictures of the ceremony on Instagram a day after, along with the announcement.

It was a simple but traditional ceremony of two days, with a Mehndi, marriage ceremony, and small reception attended by family members of Yami and Aditya. The ceremonies took place at Yami’s farmhouse at Mandi. A wedding planner was contacted by Yami’s father. Both Yami and Aditya were very particular about having a simple ceremony.

The Mehndi took place at the courtyard of the farmhouse, and Yami looked beautiful in her yellow attire. There was a Sangeet ceremony after, and the marriage took place outdoors. Yami chose to wear her mother’s 33-year-old red saree with zari work along with gold ornaments and traditional chooda and kalire. With a golden veil, choker, necklace, maang tikka and nose rings, she looked like a radiant Himachali bride. Aditya was decked up in an ivory sherwani with the traditional turban.

The marriage Mandap was decorated with marigold flowers and banana leaves. It was followed by a traditional lunch and a small reception in the evening. After the photos were posted, their co stars congratulated them. The list included Yami’s Vicky Donor costar Ayushmann Khurrana, Kartik Aaryan, Vani Kapoor, Dia Mirza, Varun Dhawan, and producer of Uri the Surgical Strike, Ronnie Screwvala.