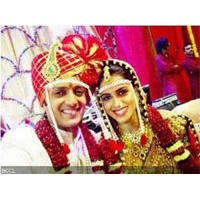 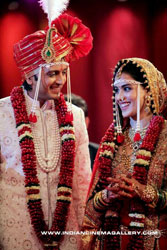 Romance, high profile or not, is hard to keep under wraps. Love is a difficult secret to keep, especially when the courtship is long. When the lovers in question are high profile public figures, you can be certain that word is bound to slip. This was not the case with Riteish and Genelia. This couple has been in love and together for ten years and no one has had enough evidence to blow their cover. It was only sometime last year when the two openly discussed their relationship did people begin to believe the rumours. Before anyone had a chance to fuel the rum or mills further, the couple officially became man and wife.

Though the wedding was announced just a short while before it took place, it was obvious that plenty of planning and preparation went into this affair that brought together some of the biggest names in the country. We may all agree that Riteish and Genelia are able to gather large crowds on their own merit, but given that Riteish’s father holds such a prominent place in Indian politics, the list was lengthened a few times over.

First to take place was the sangeet ceremony, which brought together not just celebrities but also family and friends. The evening was directed by Karan Johar and needless to say, was bound to exude larger than life appeal. It was endearing to see Genelia come in with her own baraat, in complete Goan style that included koli music and dance. With her brother and father by her side, Genelia looked nothing like the demure, blushing bride. Instead, she was as much part of the brigade, grooving and shaking to the numbers with abandon. Back at the sangeet, Shah Rukh Khan did the voice over for the entire evening, though he only made a physical appearance towards the end. Several other stars like Abhishek Bachchan, Arbaaz and Malaika Arora Khan, Soha Ali Khan and Gauri Khan made up for his absence. Genelia looked divine in a flowing white and peach lehnga and ethnic jewelry. Riteish made quite a statement in royal blue and white. It was clear that not just the couple in love, but all in attendance were having a really great time since the party came to an end in the early hours of the morning!

The wedding was a day to remember. Traditional with every Maharashtrian observance woven in, it was exciting from beginning to end. Riteish came in on the horse with a full baraat in tow, dressed in a white sherwani and a red turban. He was completely at ease and very compliant, waving to all he passed and taking in every moment. Genelia waited at the venue, the Grand Hyatt Hotel in suburban Mumbai. Dressed in traditional wedding colors, Genelia looked grand and beautiful in an outfit by Ritu Kumar, and completed with heavy ornate jewelry.

It was an affair that brought big names together from several fields ranging from politics to film. Kripashankar Singh, Chagan Bhujbal and Praful Patel attended with blessings and best wishes, while Abhishek with mother Jaya Bachchan, Jackie Shroff, Shahid Kapur, Jeetendra and Akshay Kumar represented the film fraternity. Other popular faces included Leander Paes with wife Rhea Pillai and daughter, Priya Dutt and Smita Thakrey. Anil Ambani with his wife Tina and Parmeshwar Godrej were also among those who attended. The father of the groom looked happy and jubilant, and the couple posed happily for pictures. Riteish went on to post pictures and add his thoughts on a popular micro-blogging site almost immediately. 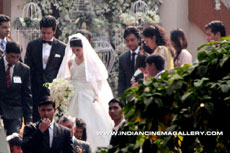 After the Hindu wedding, the couple said their vows and “I do” in Christian style. Ensuring that all were happy and had their heart’s desires met during this inter-caste wedding, an intimate ceremony was held at St. Anne’s church in Bandra, where the couple were married in the presence of family. Dressed in a flowing ivory gown, Genelia sashayed down the aisle to meet Riteish, who wore a conventional black tuxedo.

The couple celebrated their nuptials with a glamorous reception at a five star suburban hotel in Mumbai. The occasion was quite the party as many prominent members of Bollywood attended to congratulate the happy couple. As for the couple, their celebrations will no doubt continue throughout life with many happy memories yet to come. The tryst of fate is such that what we least expect happens, and try as we might we cannot fight it. For Riteish and Genelia, it brings in a new life of promise, hope and love. For all their fans who loved the chemistry they shared on screen, it is here to last.