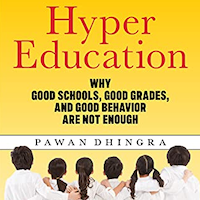 Hyper Education: Why Good Schools, Good Grades, and Good Behavior Are Not Enough By Pawan Dhingra

Dr. Pawan Dhingra is a Professor of Sociology and American Studies, Amherst College. He is the author of many books, including Life Behind the Lobby: Indian American Motel Owners and the American Dream. His work has been featured in the Boston Globe, the Washington Post, the New York Times, Salon, the PBS NewsHour, and the documentary, Breaking the Bee. He also has served as a Museum Curator at the Smithsonian Institution. He has published op-eds, including in The New York Times. He is an award-winning author and teacher.

An up-close look at the education arms race of after-school learning, academic competitions, and the perceived failure of even our best schools to educate children

Beyond soccer leagues, music camps, and drama lessons, today’s youth are in an education arms race that begins in elementary school. In Hyper Education, Pawan Dhingra uncovers the growing world of high-achievement education and the after-school learning centers, spelling bees, and math competitions that it has spawned. It is a world where immigrant families vie with other Americans to be at the head of the class, putting in hours of studying and testing in order to gain a foothold in the supposed meritocracy of American public education. A world where enrichment centers, like Kumon, have seen 194 percent growth since 2002 and target children as young as three. Even families and teachers who avoid after-school academics are getting swept up.

Drawing on over 100 in-depth interviews with teachers, tutors, principals, children, and parents, Dhingra delves into why people participate in this phenomenon and examines how schools, families, and communities play their part. Moving past “Tiger Mom” stereotypes, he addresses why Asian American and white families practice what he calls “hyper education” and whether or not it makes sense.

By taking a behind-the-scenes look at the Scripps National Spelling Bee, other national competitions, and learning centers, Dhingra shows why good schools, good grades, and good behavior are seen as not enough for high-achieving students and their parents and why the education arms race is likely to continue to expand.

In 2019, the Scripps National Spelling Bee, as sociologist Pawan Dhingra puts it, “broke.” For the first time, the Bee ran out of words for its contestants to spell, and thus crowned eight co-winners who coined the term “octochamps” to describe themselves. These results received ample media attention, but they also sparked copious negative commentary on the ethnic identities of the co-champions, seven of whom were Indian American. Popular narratives attributed these students’ success to “tiger parents”’ unhealthy obsession with academic achievement. 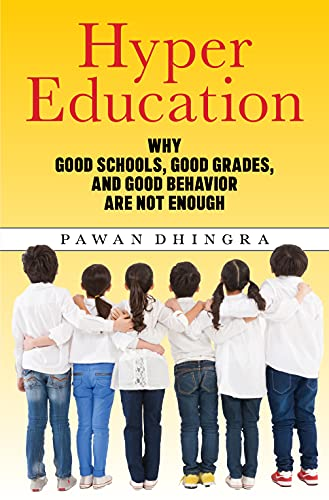 But rather than ask why South Asian Americans are so successful in spelling bees, Dhingra flips the script in his new book, Hyper Education: Why Good Schools, Good Grades, and Good Behavior Are Not Enough. Why do families invest in academic competitions in the first place? What are the implications for their local neighborhoods and schools? Dhingra takes us into the ecosystem of what he terms “hyper education”, or the pursuit of voluntary extracurricular academic enrichment for the purposes of getting ahead, not remediation. Dhingra highlights the case of Indian American professionals in highly resourced school districts and compares them with their US-born white peers. Through individual and group interviews of educators, parents, and children, as well as ethnographic observations of events including academic competitions, Dhingra crafts a vivid portrait of these activities, the families who engage in them, and the educators who contend with them.

In doing so, Dhingra overturns several myths. First, while hyper education is often depicted as a foreign (and specifically Asian American) practice, Dhingra argues that it actually aligns with the neoliberal turn in American education. Parents emphasize tracking and assessment and rely on the private market to make up for the fact that even good schools are not enough to secure success. Moreover, immigrant parents are often depicted as having an ingrained cultural predilection for education, but Dhingra shows they engage in an “Asian American style of concerted cultivation,” motivated first by trying to stand out among others, and second by moral concerns over their children’s futures. Finally, the children of hyper education are often depicted as victims of tiger parenting, but Dhingra finds they are often highly motivated, socially supported, and participating by choice. As one student shares, “I’m having fun my own way.”

In explaining what lies behind hyper education, Dhingra offers a sharp critique of the US educational system and makes a number of important contributions. First, Dhingra enriches Annette Lareau’s concept of “concerted cultivation” by decentering American whiteness. As he argues, little prior research examines how middle- and upper-middle-class immigrant parents have adapted to the current education system. Dhingra shows that their parenting style partially responds to a fear that white parents’ mobility strategies will be insufficient for their own children, leading them to resist mainstream strategies like heavily emphasizing sports. In fact, they believe that weaknesses in the US educational system will leave their children disadvantaged on an international stage. Differences in imagined outcomes require different mobility pathways and resources.

Moreover, Dhingra brings morals and values into the conversation by describing how Indian American parents view hyper education as a means of leading their children away from possible deviance and toward a stable career and family life. These motivations are not limited only to immigrant parents; white professionals, too, view an American culture of entitlement as a threat, and empathize with immigrant ideals of hard work. Yet white parents who align themselves with an immigrant work ethic engage in further moral boundary-making by also differentiating themselves from tiger parents. Dhingra’s discussion of morals illuminates how hyper education’s effects extend beyond developing human or cultural capital.

Within the educational system itself, Dhingra notes how mainstream critiques of hyper education are laden with racialized meaning. White teachers and administrators express genuine concern over their anxious and stressed students. Yet solutions are narrowly focused on criticizing Asian American parenting, even as white families also participate in hyper education. Schools and nonprofits critique Asian immigrant parenting styles, but pay no attention to the elevated status of sports. This discussion becomes a call to question the white privilege embedded in the education system.

Despite the book’s many contributions, it also raises questions that merit deeper discussion. First, we were intrigued by mentions of how interviewees perceive racial discrimination and stereotyping. Dhingra finds that contrary to prior work, none of the Indian parents he interviewed bring up explicit racism as a concern. Yet they acknowledge that race appears to matter; Dhingra quotes a South Asian father who notes, “From what I’ve read, we have to have 130 points above others [on the SAT]” (112). Other parents observe that they may lack access to racialized networks and other assets that can help their children succeed—yet they downplay these concerns. If not as a form of discrimination, then how do Indian American parents understand their children’s competitive location vis-a-vis race? How much does their class status as highly educated middle- and upper-middle-class professionals influence their perceptions? How do parents respond to criticisms of their parenting and other stereotyping?

On the other hand, the children appear to embrace academic extracurriculars as part of their social identities, while also demonstrating an awareness of racialized stereotypes. How does participation in racialized activities impact their identity development as second-generation Asian Americans? What about Indian American children who do not participate? A comparison group of Indian American families or students who reject hyper education could offer valuable insight to some of the processes highlighted here by providing a sense of variation.

One final area where we wished to see more in-depth discussion was anti-blackness. Dhingra observes that both educators and parents had assumptions and concerns rooted in anti-blackness, and that both Indian and white parents’ critiques of (other) white families echo anti-black stereotypes. What are the implications of the displacement of these stereotypes onto white families? What context, if any, does Indian immigrants’ dual-positive selectivity provide for anti-black boundary-making? What role does residential and educational segregation play in how these families deploy these stereotypes?

Of course, no one book can cover all the ground that a reviewer might wish to see. As the failures of the US’ fragmented, highly unequal, and increasingly privatized education system have been laid bare amidst the COVID-19 crisis, Dhingra’s book is a timely look at how families respond to such a system. In doing so, he debunks harmful stereotypes about Asian American culture and parenting. His book will be of much interest not only to sociologists, but also to educators and families alike.