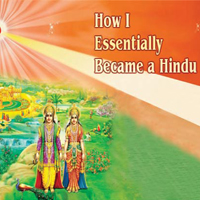 How I Essentially Became a Hindu 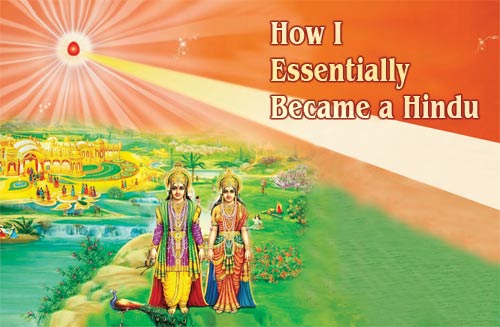 Can you imagine in Europe there are people who believe there is no Bhagawan (God)!” Baba Ramdev, a highly popular yogi, said this to a sea of thousands of Indian school children with an expression of genuine wonderment on his face. I saw it on TV, and it made me smile.

He is right. In Europe, there are people who believe there is no God and I almost had become one of them. It is quite normal there. Yet for most Indians this is unbelievable: “Don’t these Europeans have any reasoning power? Can’t they come to the conclusion that there must be an invisible power and intelligence at the base of this vast universe and actually in our own bodies made up of billions of intelligent cells, as well?” They certainly have a point.

However, most Indians are not aware why many westerners believe there is no God. The reason is that we in the West have, if I may say so, a different God. Right from childhood we are ‘taught’ about the Christian God who is declared to be the only true God: a male, superman-like entity, watching over us from an unknown place, who is greatly favoring Christians, is jealous of other gods and actually quite unfair, because he sends all those who don’t join his Church, eternally to hell. Eternally! Already as a teenager, I lost faith in this God and together with it, thankfully, the fear of hell.

In 1980, I stopped over in India on my way to Australia. At least, that was what I thought. I did not break my journey in India for spiritual reasons, as I did not associate Hinduism with anything worthwhile.In school I had learnt that Hinduism is about an unjust caste system and plenty of (false, since Christianity has the true one) gods, and not knowing better, I had believed it. However, during this stopover, I stumbled on India’s ancient tradition and was amazed at its depth. I appreciated that intelligence was used in trying to establish the truth about this universe and no unverifiable dogmas were imposed. Swami Vivekananda’s Jnana Yoga was the first book I read. He stands in a long line of Rishis who have dedicated themselves since time immemorial to an intensive, disciplined, inner search for what is essentially true. Their findings don’t contradict modern science. 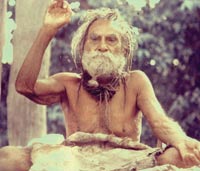 The basis of every appearance in this universe, including our own person, is the same one Essence or Presence – real, infinite, eternal, formless and nameless. All forms and names are like waves on the ocean. The waves may think that they are separate from the ocean. They may not even see the ocean but only other waves. They may cling to their (temporary) form and be terrified to lose it, but ultimately all waves are nothing but the ocean and nothing is lost when their form subsides. Similarly, though we may consider ourselves as separate from the whole and cling to our impermanent person, our essence is pure, limitless awareness and nothing of substance is lost when form and name are lost. The purpose of life and its fulfillment is to discover who we really are, the rishis declared.

This knowledge made immediately sense to me and was actually a source for great joy. It was in tune with my vague intuition that, if there is a God, he must be the basis of everything and not a separate entity. Early during my stay in India, I met Devaraha Baba and Anandamayi Ma, two renowned saints of that time. I had never met persons like them. There seemed to be nobody there behind their eyes and their presence felt beneficial. “It is because they are enlightened,” someone explained to me. “God shines clearly through their form, because there is no ego to block that.”

“God”- this word had been missing in my vocabulary for long, but it comes up frequently in India among those who speak English, young and old, and strangely, here I did not sense any hypocrisy as I did in Germany. Indians use “God” for the many different Sanskrit terms because it is the English term for the creator of the universe and they generally don’t realize that the Abrahamic God is different and requires believing in unverifiable dogmas. In India, the concept of God is much vaster and based on a genuine enquiry. The outcome of this enquiry is that God and one’s self are basically the same. “This Atman (Self) is Brahman (God), “declare the Vedas. It all made sense. The question however was now how to feel or experience this truth as real.

Anandamayi Ma, a saintly woman from Bengal who died in 1982, advocated Bhakti – love for the Divine and asked us to be always – 24 hours a day – aware of His (‘His’ does not imply ‘male’) Presence. “You are always in His loving embrace,” she said. It sounded authentic; however I was also drawn to Jnana, (knowledge), to Advaita Vedanta and Kashmir Shaivism.

I genuinely tried to be aware of my innermost Being and to develop love for it. In the morning I resolved to be ‘the whole day’ aware, and while brushing my teeth, I had already forgotten about it. It was not that easy. The rishis knew that and gave many helpful tips – tips that are often missing in the western new age scene, which has heavily borrowed from the Hindu tradition, often without acknowledging it.

One important point is the refinement of one’s character. To be able to sense these subtle, yet very real realms of awareness, the mind and intellect have to be refined. The term “Arya” in the Vedas is not referring to a race. It means “noble.” Whoever lives a noble life is an Arya. “Let noble thoughts come to us from all corners” is a prayer from the ancient Veda. And further, “Brahman permeates the biggest and the smallest.” “See God in everyone.” “Respect nature,” and so on. 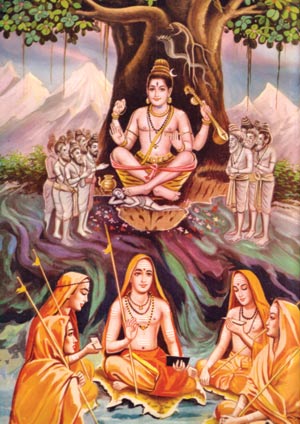 I became quite naturally a vegetarian. I could not partake anymore in this colossal bloodbath all over the globe, hidden from our eyes, but very real for each one of those poor creatures that are slaughtered without mercy. I tried to get up early, though I usually fell short by a couple of hours from the time, one gets up in ashrams – 4 a.m. I practiced yoga and meditation, and tried to catch any negative thought/ emotion before it could lodge itself in my mind. Wishing well for everyone and doing what feels right, was the basic motto for my life. I enjoyed singing bhajans and even more listening to and reciting myself Vedic shlokas. I tried to follow for us westerners rather unusual rules, like ‘the freer you give from what you have (knowledge, wealth, etc.) the more you will receive’. I stopped being overly concerned about “fulfilling my desires” that – so we were taught in psychology class in Europe – was paramount for mental health. I trusted Indian wisdom more than western psychology. There were times when all this was easy and many unbelievable coincidences happened, indicating that there is indeed a “God” making his caring Presence felt. There were also many dry times, when it was difficult and I almost despaired at being neither here (immersed in worldly matters) nor there (knowing the truth).

Meanwhile 33 years have passed in India, and I still have not been in Australia. I feel at home in Hindu Dharma. When somebody asks me, “Are you Christian?” (which happens frequently), my answer is, “I am Hindu.” Have I discovered that underlying Presence that is claimed to be our essence?
Yes and no. Yes, because I had glimpses of a different state of awareness that feels special and yet completely natural. When this state occurs, life is immensely worthwhile, never mind whether pleasant or unpleasant things happen on the outside.

No, because shifting into this state and remaining in it, is not in my control. It is only occasionally “granted.” Apart from discovering that there is indeed a different, blessed way of being, there are many other benefits that India granted. Death lost its sting to a great extent. I released that belief in rebirth is more than a belief – it is logical and scientific research supports it, too. The law of Karma also makes much more sense when it is stretched over many lives and it helps to accept one’s present situation and the differences between humans. This acceptance is not fatalism. It is in fact helpful in bringing about a change in the situation, if so needed. Thoughts lost their power to a certain extent, as there is a witness at the back watching them, though their flow has not stopped and so far, does not even seem to be stoppable. The most important aspect however is: I developed great trust in That what upholds me and everyone or should I say, trust in Bhagawan? Actually, I could not imagine living without it. 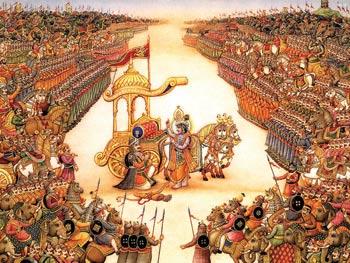 I am very grateful to India’s wisdom. It is all-inclusive of every human being without putting any prior conditions. “The whole world is one family,” it declares. It does not straight-jacket the mind by demanding belief in incredible dogmas, it does not require a membership card to be saved, and it gives great support for a happy life. Hindu Dharma is not a belief system but is based on natural, universal laws and in my view clearly the best option mankind has for living together in peace and harmony.

About Author
Maria Wirth is a German and came to India for a holiday after finishing her psychology studies at Hamburg University. She visited the Ardha Kumbha Mela in Haridwar in April 1980 where she met Sri Anandamayi Ma and Devaraha Baba, two renowned saints. With their blessing she continued to live in India and dived into India’s spiritual tradition, sharing her insights with German readers through articles and books. For long, she was convinced that every Indian knows and treasures his great heritage. However, when in recent years, she noticed that there seemed to be a concerted effort to prevent Indians (and the world) from knowing how valuable this ancient Indian heritage is, she started to point out the unique value of Indian tradition.