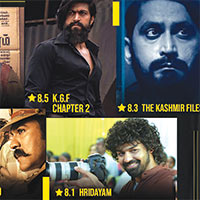 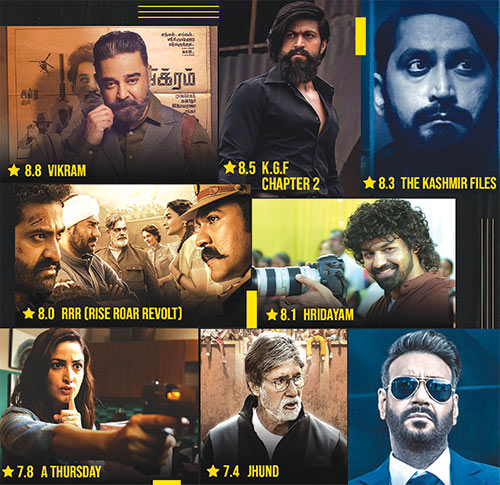 Internet Movie Database (IMDb) has recently released a list of the 10 most popular Indian films which have been released so far this year. The Tamil movie Vikram, starring Kamal Haasan, has topped the list with 8.8 points out of 10. KGF Chapter 2 is in the second position with 8.5 points, and The Kashmir Files has captured the third position with a score of 8.3 points.

Released in June 2022, Vikram is a Tamil film starring Kamal Haasan, Vijay Sethupathi, Fahadh Faasil, Kalidas Jayaram, and Narain and Chemban Vinod Jose playing the lead roles. It is the spin-off of the film of the same name released in 1986. This Tamil action thriller has also been dubbed in Hindi, Telugu, Malayalam, and Kannada. KGF Chapter 2 is the sequel to the 2018 film KGF Chapter 1. Yash, Sanjay Dutt, Raveena Tandon, Srinidhi Shetty, and Prakash Raj are the main actors in this period action film. This Kannada movie’s director is Prashanth Neel and has been dubbed in Hindi, Telugu, Tamil, and Malayalam.
The Kashmir Files has already received a huge response and public appreciation. Based on the exodus of Kashmiri Pandits in the 1990s, the film is directed by Vivek Agnihotri and the cast members include Mithun Chakraborty, Anupam Kher, Darshan Kumar, and Pallavi Joshi.