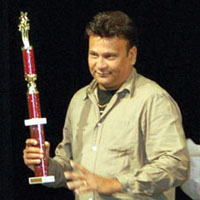 I was at a singing competition recently (the IRCC Idol in South Florida) cheering all the talented participants, and especially my wife Rupal J. She had selected a beautiful semi-classical song from the movie Lamhe. It was no coincidence that the best songs and those that made it through the tough competition to the final round had a classical base.

When the winner – Kamal Mehdi (we talk to him later here) – sang Nusrat Fateh Ali Khan Saheb’s Piya Re, and then Mitwa from Kabhi Alvida Na Kehena, there were several applauses during the song – especially when he would sing the taans. A taan in Hindustani classical music is sung by stringing a series of notes very rapidly. A taan properly sung often evokes applause during a performance, and takes both the artist and audience a different level. They are some of the defining characteristics of Hindustani tradition of Indian classical music.

This is where I started thinking about the difference between attending an Indian classical and a Western classical performance. Both are called classical music, but the similarities pretty much stop there. We will discuss the differences from a musical aspect in a future article and just talk about the performances here.

First is the matter of applause. Clapping during a performance is not really recommended during a Western classical performance, even if there appear to be logical breakpoints in between. A symphony for example, is often made up of sections called movements. There is usually a pause of a few seconds between the movements, and it is very tempting to clap during that time, but it is against accepted decorum.

In contrast, listeners can get quite taken away during performances of Hindustani classical music, and it is not very surprising to hear applause, or even words of admiration exclaimed.

Both are still relatively formal affairs. Western concerts are often reminiscent of a black-tie affair, and this tendency seems to be growing for Indian classical concerts too as it begins to attract a wider audience of Westerners, who find the style and sounds exotic. Traditionally however, the atmosphere has been more casual.

I recommend everyone to attend a few concerts and performances, be it Western or Indian, preferably both. If you are not used to it, initially it may sound daunting, but the rewards are ample. With Western classical music, it is best to begin attending concerts playing the music of famous composers like Bach, Beethoven, and Mozart.

A Hindustani classical music concert in contrast is structured a little differently, and often around ragas. What does one listen for? Novices can begin by identifying the various sections of the piece. The renditions of the raga often follow the Alaap-Jhor-Jhala format. In the very beginning, the artist just plays around with the notes leisurely without any rhythm. It is an exploration of the notes to be used. This is the Alaap. The next section, called the Jor, begins to show structure, but there is still not rhythm accompanying it. The composition enters the Jhala section once the percussionist joins in. At this point, the music goes from a slow tempo (vilambit) to a climactic complex fast tempo (dhrut) before reaching a distinctive finale.

In this issue, we talk with the IRCC Idol 2008 winner, Kamal Mehdi. Kamal comes from a family with a rich musical background. Although he himself has not been trained in any classical music, both his father and mother were accomplished singers. His sister Mehnaz is also a renowned and critically acclaimed movie playback singer in Pakistan. His grandfather used to teach dadras and thumris in Lucknow.

Amit: Your performance at the competition was remarkable. Where did you learn music?
Kamal: Everybody kept asking me this same question after the competition. However, I have never learnt a class, or learnt music formally. However, I come from a musical family. So it must be something that I inherited. I have always wanted to learn classical music, and hopefully I will soon.

Amit: What kind of performances have you given earlier?
Kamal: This was the first time I have participated in a competition, and I am very happy to see how good it was. Once in a while, I participate in shows and sing in parties with my brother Ehsaan who plays the guitar and also sings.

Amit: How did you select the songs for the competition?
Kamal: Piya Re and Mitwa are very famous and very difficult songs. For a competition, you need songs which are based on classical music.

Amit: How do you practice those songs, especially without musical training?
Kamal: Somehow I can sing those songs easily. I have always liked to sing the classical kind of songs. When I have to select a Kishore Kumar song for example, I like Kuch To Log Kahege from the movie Amar Prem. That is a difficult song. My real practice is that I select difficult songs to learn. That has been my training. As a result, other songs become easy. Other songs like this are Ghulam Ali’s Hungama and Chupke Chupke.

Amit: What kind of pitch do you prefer to sing on?
Kamal: I usually try to pick a range in which I am comfortable. In both Piya Re and Mitwa, I started with a half-note lower than the original song. Even though I could have sung it on the original pitch, I don’t go for very high or very low pitches.

Amit: Who are some of your favorite singers?
Kamal: I would have to say Bade Ghulam Ali Khan Sahib. His style cannot be matched. In fact, I also listen to a lot of Ghulam Ali, Jagjit Singh, Kishore Kumar, Rafi, Lata and Mehndi Hassan. Among the new singers, I like Sonu Nigam. We don’t see those kind of lasting singers any more.

Amit: We have seen a lot of singing competitions like Sa Re Ga Ma, Indian Idol and others. What do you think about them?
Kamal: Many of these shows seem to be driven from a business point of view. In many cases, we see the judges praising the singers, and then they get voted out. Moreover, the competitions look for singers who can sing all kind of songs. If a singer can perform only one kind of song, however good, he is out. The good thing though about all this is that we are seeing a lot of emerging talent, most of them very young. This is beneficial to the industry and to the aspiring singers.

Amit: What advice would you give to the young generation wanting to sing?
Kamal: Try as much as you can to learn your language, be it Hindi, Marathi, Gujarati, Urdu or any other. This is very important. You need to feel the words before you can sing it well. If you do not know the meaning of a song, it is difficult to express it. This is also the only way to ensure proper diction.

Amit: What are you future plans?
Kamal: I would like to put together a live band and work on an album. These things take a lot of time.