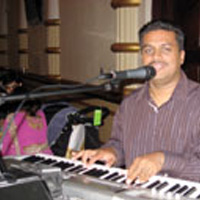 As I dig into my earliest memories, it is difficult for me to think about the days of Navratri (nine days of worship and dance) without associating it with garba and raas. Garbas show up in weddings too. It has grown in popularity beyond the Gujarat region where it originated. Although the majority of garba songs are still sung in Gujarati, Hindi movie songs often show up in between – a simple change in their rhythm converts them into Garba!

The traditional garba is danced around a circle by both women and men as they move to the beats of the music. Women normally wear bright and colorful chaniya-choli accentuating the gracefulness of the dancers. Although elaborately embroidered kedia is more traditional for men, they are more often seen in kurta suits.

The beat of the garba is of paramount importance, as it determines the steps and tempo to which the dances are performed. Although most of them are based on the four beat cycle, it is the distinctive rhythm which gives garba its unique individuality. Even the Cha-Cha and Tango are based on four beat cycles – with very different results. Moving a beat or two and changing their emphasis changes the whole personality of the music. These beats are traditionally provided by a dhol, dholak, or sometimes tablas. We are also beginning to see the presence of drums as the main percussion instrument. Although a western instrument, they blend into the songs very seamlessly.

An evening of garba typically starts with what is called the three-taali (the three-claps dance). This is the simplest form of garba in terms of steps and moves. Grave gives this simplicity a beauty that is almost inexpressible. The feet follow and match the beats of the drums. The first three beats of the four-beat cycle are also accompanied by a clap. The claps allow artistic interpretation and creativity. The fourth beat is used up to move forward, turn, or just swing the arms. As time progresses, the tempo of the beat increases. It is not unusual at this point (which can often be more than an hour after the garba started) to see dancers taking breaks, waiting for the next section of the event, which is the be-taali (two-claps).

Now, the two-clap dance is an altogether different matter. For a good many years I had to relearn it from my wife, Rupal. The complication here arises from the fact that it is made up of a three-step forward, two-step back basic cycle, which also has a full turn and two half turns. It looks difficult, but only for the first few minutes. It is both fun to do, and fun to watch – just like the Olympics synchronized swimming events. It is a true display of a collective expression and spirit.

Garba performances are a little different than the other garba events, since it incorporates props (like pots) and what purists would call non-standard steps. The entire garba is choreographed to the same rhythm and beats (which is really the defining characteristic of a garba) and a particular song.

In recent garba programs, we have seen more and more creative formations and steps. The mostfascinating are ‘breakaway’ groups of two to six people who weave their way playfully and gracefully around the hall instead of dancing in circles. Garba thus, is still full of excitement and lends itself to creative ideas.

In this issue, we talk to Shawn Bhajman, who is an accomplished musician and a professional recording engineer who plays various instruments. He has played with live garba audiences for many years. Most recently, he has played with Hari Om Sharan and the IRCC Idol (Hindi song competition in South Florida).

Amit: How come Trinidad has so much Indian music?
Shawn: We are third generations Indians. The music is part of our culture and we have kept that. We have been listening to Indian music since babies with our parents, and grandparents.

Amit: You play along with garbas, bhangras, and bhajans – many of which are in different languages. How does that affect your playing and how do you adjust?
Shawn: When I was young, I did not know the difference between Hindi, Gujarati, or Punjabi songs – we had the same love and appreciation for all the songs. We never labeled a song as Punjabi or Gujarati. In fact, when I was young, I did not even know that India had so many languages! But the music is universal, since they are mostly raga-based music, sharing similar styles, melodies, and rhythms.

Amit: How does it feel when you play to a song that is in a language you do not understand, like Gujarati or Punjabi?
Shawn: Music is very expressive – you can relate to the mood and type of song. In the case of movie songs, since we always watch the movies, it gives us context and insight.

Amit: How is playing for a dancing crowd (like during a garba) different from playing for a listening crowd?
Shawn: When performing for people who are listening, you have to be more precise. You have to choose what you are going to do and what you are going to sing – depending on the mood and environment. Since people are just listening, you have to be very good. In garba, where everybody is dancing, the beat is more important. Garba also has a lot of energy, since it is very upbeat and festive. They have their own feel and expression.

Amit: Sometimes you accompany a singer singing a garba that you have never heard. How do you blend in?
Shawn: The first thing you do is get the notes that they are using to sing. With experience, it comes naturally. When you have learnt different ragas, distinguishing one song from another becomes easier. Once you have the notes and the tune in your mind, you can be creative without throwing the singer off. It is important that you really listen to what is happening. I think this is what makes a person a professional.

Amit: What kind of musical training do you have?
Shawn: In Trinidad, I did not have any formal training. I was mostly self-taught. My brother taught me a few things, and then it was practice. I have been playing since I was 13, and played for one of the biggest groups in Trinidad. When I moved to New York in 1989, I started learning vocal Indian classical music from Shri Ajay Jha. I also took audio engineering and live systems training in NYC. I have done nearly 30 recordings for others, and have a few of my own.

Amit: What advice do you have for youngsters who want to learn?
Shawn: I teach harmonium, vocal, and keyboard, but there is no such thing as overnight learning. Students must love what they are learning, have dedication, and give time to practice. I think music is something good to learn – it gives you peace of mind. It also allows you to entertain yourself. Music is an excellent activity that keeps kids focused and involved in our culture.

Golden India in The Olympics : The Wait is Finally Over
Ramadan: May Peace Prevail Everywhere