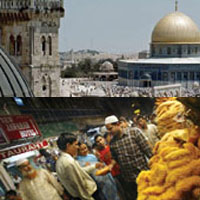 The time has come for the Muslims around the world to observe the month-long period of extreme abstinence, discipline, and self-control – Ramadan. The absence of food and drink and other pleasures provides a perfect opportunity to concentrate on prayer and worship. Not having the luxuries of life on hand makes it easier to reflect on life, start afresh, and give life a new direction. During this time, the devotions are supposed to help Muslims reclaim the organizing principles of revealed religion, which cannot really happen without regaining control over one’s desires.

It is also the perfect occasion for one to ponder upon the virtues of peace. In the present day scenario, the entire Muslim world is facing an environment of distrust, hatred, violence, and mayhem. Post 9/11, there is a setting of doubt and suspicion involving the every move of many Muslims all over the world. In this darkest hour, the true need is that of extolling the virtues of what Ramadan actually means – the actual preaching of prophet Mohammed and the emphasis on maintaining peace rather than indulging on meaningless violence, which does nothing but takes one far away from the Supreme Being – Allah.

Elements of terrorism, extremism, and separatism have raised its nefarious head all over the world in a threatening way. The proponents of such violent ways forget that Islam, or a matter of fact, many religions of the world never preach or encourage violence. It is the vested interest of a handful of criminally minded evil people who distort the teachings and preaching of the religious scriptures to serve their own purpose. Such people can be hard nuts to crack and can rarely be brought to their senses. At the same time, there are hundreds and thousands of innocent people, mostly youth, who become adversely motivated by these perpetrators of crime. They start to believe the cunning and shrewdmisinterpretation of the religious dictums and get trapped into becoming partners in crime.

Ramadan is the perfect occasion to re-examine what it means to be a Muslim. For true Muslims, this period of fasting and maintaining sanctity acts a deterrent to indulge in any kind of harmful activities. Actually, Ramadan attempts to convey significant and relevant teachings to the people. The religious holiday is like a shield between oneself and Allah’s anger and Hellfire; thus preventing a Muslim from engaging in foul activities. Secondly, the period involves a recital of the Holy Qu’ran so that the pious Muslim foregoes all worldly pursuits and draws himself closer to the Allah. When one sins, one feels distant from Allah. It is also a time for devout Muslims to acquire patience and emerge as a strong willed person through the exercise of fasting and self-control. Striving for Ihsaan (righteousness and sincerity) and staying away from riyaa’ (showing off) also makes a person closer and dearer to Him – as He looks at all his subjects with the same view. The period of Ramadan also inculcates the habit of refinement of manners, especially those related to truthfulness and discharging trusts. During this month, Muslims ponders several questions including whether they are following the manners of Islam by telling the truth and only telling the truth? Are we sincere? Are we merciful to the creation? Finally, it is important that observing the Ramadan period in its truest sense enforces discipline and strictness, and not in a way that leads to fanaticism or going outside the bounds that Allah has put forth.

For true and devout Muslims, it is indeed the time to maintain peace and harmony, unity, and universal brotherhood. They are the ones who fast from dawn to sunset and say special prayers during the evening hours. They strive to read the entire Qur’an during this month and come to understand the words better than before.

It thus becomes a significant responsibility for the majority of Muslims to ensure that an environment of peace, trust, and brotherhood prevails all over the globe. It is their duty to shun evil and bring their near and dear ones back from the path of violence and destruction. Instead, those who stray should be engaged to follow the path of Allah, made to understand and follow the actual teachings of Prophet Mohammed, and inculcated with the sense of being a responsible and peace loving global citizen, one professes what Islam is all about.

What could be a more fitting occasion to kick start transformation than the auspicious holiday, Ramadan. May peace prevail everywhere!