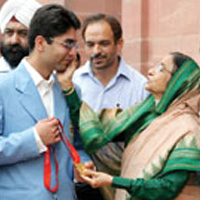 Golden India in The Olympics : The Wait is Finally Over

The wait for an inordinately long 112 years is finally over. The prayers of many Indians have finally been answered. The dream of a sports-crazed nation deprived of any glorious success is ultimately cherished. Yes, the once thought to be impossible has finally taken place. India can now boast of an Olympic gold medal in an individual event – thanks to the Chandigarh-based shooting prodigy Abhinav Bindra.

What can be said about the success of Bindra in the 10 meters air rifle shooting event, which won him the coveted gold medal in the Beijing Olympics and fulfilled the long-standing aspirations of Indians to be a proud winner of an Olympic Gold Medal? Historic? Sensational? Well, every possible adjective in the dictionary might fall short of the emotion, pride, and honor every Indian is feeling after this success.

Hockey has remained India’s only medal hope for several years, but poor infrastructure and poor management of affairs at the federation level have brought a steady downfall to the game since 1980. The present position of the game is well understood, given the fact that for the first time in all these years India failed to even qualify for the Beijing Olympics

On the individual event side, the gold medal has always eluded India. Indians have managed silver or a bronze on a few occasions but not the gold. In the pre-Independence era, Norman Prichard, an Englishman representing then colonial India won the first Olympic medal – a silver for the country in track and field (Paris, 1900). K.D. Jadhavwon the bronze medal in wrestling in Helsinki (1952). Dr Karni Singh won the bronze for shooting in Tokyo (1964). Most recently, Leander Paes won the bronze for Tennis at the Atlanta Olympics in 1996, and Karnam Malleswari won the bronze in wrestling in 2000 (Sydney). During the 2008 Beijing Olympics, wrestling star Sushil Kumar earned a bronze medal.

Barring the above, it has always been a dry run for the Indians though the country sends a sizeable contingent every four years to the Olympics. There have been some close calls such as when Milkha Singh and P.T. Usha came strikingly close in Rome (1960) and Los Angeles (1984), but missed the bronze medal by 1/10th and 1/100th of a second. In the end, it all came down to the same old story – raising hopes that are ultimately crushed bitterly.

The 50-odd member strong Indian contingent at the Beijing Olympics too had some hopefuls – Rajyavardhan Rathod (shooting); Saina Nehwal (badminton); Leander Paes and Mahesh Bupati (tennis); Anju Bobby George (track and field) and the wrestling team – all were said to be in the contention of some form of an Olympic medal. When it mattered the most, they failed to live up to expectations, and it all boiled down to a 25-year-old Sikh who fought against all odds to ensure that the prestigious gold medal in 10 meters air rifle shooting hangs on his neck with the backdrop of Jana Gana Mana playing in the Olympic shooting arena.

Hail Abhinav Bindra, whose name means unique. Indeed, he has registered a unique feat. It was on August 11 that his score of 700.5 in the shooting event topped all other competitors and made him the first Indian individual gold medalist at the Olympics. Born to an affluent Punjabi family, Abhinav displayed exceptional shooting skills beginning in childhood. He was the youngest participant in the 2000 Sydney Olympics. Abhinav won six gold medals in different international meets in 2001. At the 2002 Commonwealth Games in Manchester, he won gold in the pairs event and silver in the individual event of 10 meters air rifle shooting. In the 2004 Athens Olympics, he managed to break the Olympic record, but failed to win a medal. However, the saying better late has never been so true for this young M.B.A who owns a company called Abhinav Futuristics. He is a recipient of the Arjuna award in 2001 and the Rajiv Gandhi KhelRatna award for the year 2001-2002.

While the success of Abhinav has brought smiles, glory, and pride to the mother nation, it has also inspired millions of Indians all over the world. Quite interestingly and ironically, there was another Indian who had won a medal in the Beijing Olympics. Pity that for most of the Indians, his name went unnoticed.

Raj Bhavsar, aged 28, is an American artistic gymnast of Indian descent. He was a member of the 2001 and 2003 World Champion U.S. team. At the 2004 Olympic Trials, he was in contention for the U.S. Olympic Team. He was named as an alternate. This time too, despite occupying third position in the Olympic trials and the Visa championships, Raj wound up an alternate to the six-man team. However, after team member Paul Hamm was injured, Bhavsar was selected to the team as first alternate and competed in the team final to win a bronze medal behind China and Japan. He became the third Indian-American ever to medal at the Olympics, after Mohini Bhardwaj and Alexi Grewal.

It is indeed a great honor and matter of pride for Indians to see two of their own standing on the victory podium, albeit for two different countries. There is no doubt that Abhinav’s medal is surely going to be a great inspiration for the sports fraternity in India, and it is certainly going to foster the feeling that, if we Indians try and work hard, we too can win an Olympic gold medal.