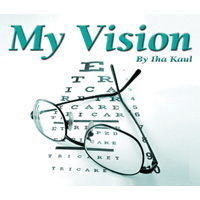 My Vision By Iha Kaul 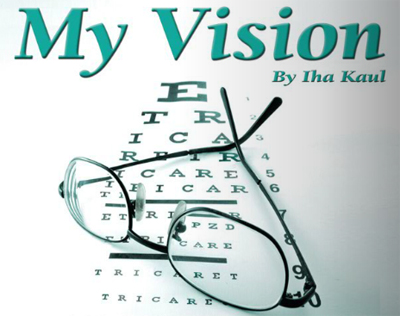 I was in the third grade when I got my first pair of glasses. I used to hate the way my lenses would sit menacingly on top of my nose, never failing to leave a mark. At first, these glasses changed the familiar appearance of my world. They turned what I believed to be a haven of beautiful green sky into a forest with pines, maples, and woodland creatures. The snow that I assumed to be a thick white blanket became defined as small and unique ice crystals. These glasses aged my mother with the wrinkles I never knew her to have, and dotted my father with the stubble I thought was shadow. As my world became clearer, I soon came to realize that my glasses were not gateways to the fairy-tale idealism I saw them to be.

In this newly defined world, appearances soon took on a whole new meaning. I came to see that these glasses of mine altered the way people looked at who I was. I lost my title as self-proclaimed “beauty-queen” and succumbed to the label of nerd. My dreams of becoming an acclaimed Indian Bollywood actress were shattered by the stigma of being a “glasses geek.” Besides being the girl with the strange name (more than once have I been addressed with the “Yee-Haw” of a cowboy), I was the girl with the strange eyeglasses as well. Glasses provided me with yet another way to be different during a time when I simply wanted to be the same as everyone else.

The eyes that had once let me see a world that I desired now exposed me to realities I did not want to see.

It was this reality that shed a new light on the role of my spectacles. I have now come to respect my eyeglasses as the permanent fixture through which I can see my own responsibility in the world. I try to see life in all its honesty and develop a dedication to making the world a place that I wish to see.

The need to look beyond myself and see more than just the surface sparked my commitment to community service. I started teaching students from my neighboring city Lawrence through PALS. Every student I interacted with brought different challenges and struggles along with them. Teaching opened my eyes to a world where people were diverse: a world where it was alright to be a little different. My students would often shirk away from problems they thought no one would understand. More and more, I began to see the importance of being able to relate to others and be emphatic to their concerns. Whether it was a challenging math question, or an issue at home, I tried my best to understand them and where they were coming from. The chance to see others learn helped reacquaint me with my own passion for learning and understanding new things. My glasses were no longer a boundary to my connection with society: they became the scope through which I tried to understand other’s struggles.

Over the years such learning experiences have really made a mark on my life. I seek every opportunity I can to bring my excitement and enthusiasm for learning to myself and others as well. As I grow and move on to college, I can see myself pursuing my interest in community service. With my new vision, I can see clearly that I have the power to make a difference in somebody’s life. While I still embrace all that my glasses have shown me, I am ready to take on new challenges and get exposed to new ideas. Though I have come a long way from being the “four-eyes freak show,” in my new adventures and journeys through college and the rest of life, I will always make sure to bring along a pair of glasses in the back of my suitcase.