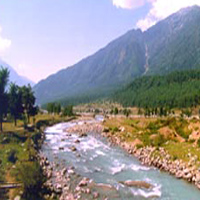 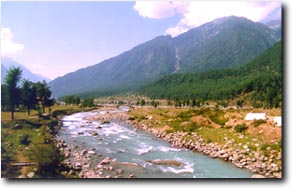 Kashmir is India’s own piece of heaven on Earth. For ages, this picturesque valley has allured tourists and adventurers into its mesmerizing maze. People from all walks of life and from all parts of the world have fallen for the captivating charm of this valley, which offers breathtaking natural beauties such as insurmountable mountain peaks, serene blue lakes, and unstoppable waterfalls. Beyond these, Kashmir is one of the most revered places of religious importance for Hindus and Muslims alike.

Bounded by the snow capped Himalayas, the Pir Panjal Range, and the Nanga Parbat, Kashmir might not be a cold place as far as political agitations are concerned, but the united will of peace-loving residents and fearless wanderers have been successful in restoring some sort of normalcy in the valley. The present condition in Kashmir makes it a fairly safe travel destination for Indians as well as foreign tourists.

A visit to the state of Jammu and Kashmir could begin from either the winter capital of Jammu or the centrally located summer capital, Srinagar. Jammu is located at the junction of the plains and the hills, and is thus more known to travelers as the gateway to hilly Kashmir. Jammu is also famous for its temples and forts. Accessible from all parts of the country by rail, road and air, Jammu is 360 miles away from the national capital of Delhi. Jammu is bounded by the Tawai and Chandrabhaga rivers. On the left-hand side of the flowing Tawai’s bank is the 3, 000-year-old citadel of Dogras, the Bahu Fort. On the opposite side lies the Mubarak Mani Palace of Raja Hari Singh. Towards the north on the way to Srinagar is the Ramnagar Fort which is famed for its interiors decorated by wall paintings of the Basouli School of Art. In fact, art and culture is an integral part of Kasmir. A manifestation of Kashmiri paintings, sculptures, and terracotta can be seen at Dogra Art Museum in Jammu. Similar collections of paintings, miniature art pieces, manuscripts, and books can be found at the Amar Mahal Palace on the northern fringes of the city. Another important attraction in Jammu are the temples. The centrally located Raghunathji Temple needs special mention due to its gold plated walls and ceilings as well as its colorful marble works with wall paintings. The Ramveereswar Temple is also a must-see for its thousand shiva-lingams.

Now, let’s move from the winter capital to the summer one – Srinagar. Srinagar is the all-time favorite attraction for all tourists to Kashmir mainly because of the variety of sight seeing attractions offered. Who can resist the appeal of Dal Lake? It is absolutely magnetic. The lake encompasses seven square miles and is comprised of three lakes, Gagri Bal, Lakuti Dal and Bara Dal, which are separated by floating island masses. Dal Lake is known all over the world as the abode for shikaras and houseboats. Along the Dal, one can find a number of floating aqua-hotels, or houseboats, that provide five star residential facilities similar to what is available in a hotel. Shikaras, decorated boats, ferry passengers from the banks to houseboats and form the basic impression of Kashmir among the tourists. Houseboats are not only found in Dal Lake, but also in Jhelum River and Nagin Lake, both of which are connected to the Dal by way of canals. Jhelum River is, in fact, one of the lifelines of Srinagar, and the city is based around the famous river. 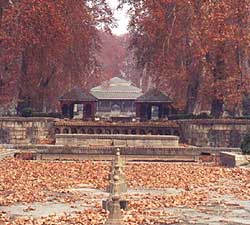 On the heart of Dal Lake is Nehru Park, the memorial park built on Gagri Bal Island, and it is the place where Jawaharlal Nehru was imprisoned. Just at the end of the park is Shankaracharya Hill, which houses the famous Shankaracharya temple. Built during the time of Jahangir, the temple is at a height of 1,000 feet, and it offers a panoramic view of Srinagar from the top. Another island on the Dal is the Char Chinar, which is famed by the presence of four Royal Chinar trees. Three miles away from the city, to the north of Dal Lake, is the Hari Parbat which houses a fort built during the mid-19th century. Further away from the city is the Chasme-Shahi, a picturesque spring around which the Jawahar Botanical garden is situated. The waters of Chasme-Shahi are said to have medicinal powers and can cure diseases. Around the Chasme-Shahi, one can find the Pari Mahal, the entertainment palace of Dara Shikoh who was the son of mogul emperor Shah Jahan.

Some of the most important and perennial attractions of Srinagar are various gardens or ‘Bag’ as they are called locally. Nishat Bag was carved out of a mountain block on the periphery of Dal Lake, and it enthralls visitors by its sheer magnificence of flowering and fruit bearing trees and plants such as chinar, cider, cyprus and many others. The most famous of Srinagar’s gardens is the ‘Abode of Love,’ Shalimar Bag. Built by Moghul Emperor Jahangir, the garden is bound on all sides by chinar trees. It has a four-tier structure aimed at providing maximum pleasure for the Emperor while he was vacationing in Kashmir.

Certainly among other places of interest in Srinagar are the many mosques. Hazratbal Mosque, located just opposite the Nishat Bag on the western bank of the Dal, is a pristine white colored marble structure with great architectural beauty. The Mosque houses a hair from the beard of the Great Islamic Prophet Hazrat Mohammed and hence is a highly revered institution for the Muslims. Other famous mosques are the Shah Hamdaan Mosque, the Shahi Mosque, and the Jama Masjid.

As far as lodging in Srinagar is concerned, while there are a number of high end to budget lodging options in the city, it would be most advisable for the tourists to enjoy the hospitability of the floating mansions, the houseboats, for a different kind of experience, one that will be savored for a lifetime.

The beautiful hill station of Kashmir, Pahelgaon, is located 58 miles away from Srinagar. The road from Srinagar to Pahelgaon offers yet another sterling attraction – Pampur which is the only other place in the world after Spain where saffron is cultivated. Pahelgaon is a snow capped hilly resort, characterized by its natural beauty. It happens to be the Pehla Gaon (first village) when entering Kashmir from Ladakh through the Zojila Pass, thus the name. The confluence of West Lider River and the East Lider River takes place in this peaceful and tranquil town. Tourists should not miss the opportunity for a short stay in Pahelgaon in order to enjoy the serenity of the night amidst the backdrop of the snow capped mountains.

As noted, lakes are a dominant feature of the landscape in Kashmir. The most prominent among them is the Wular Lake, 31 miles from Srinagar. The lake is located along the Beas River, and it is India’s largest sweet water lake. Encircled by sky-reaching pine, fur, and poplar trees, this lake makes even the gloomiest of visitors yell out in ecstasy. An adventure-loving tourist can continue his lake tour by visiting the Manasbal Lake, 18 miles from Srinagar, which is famed for its lotus collection. Or, alternatively, adventurers could trek to the Gangabal Lake which is considered as holy as the Ganges by Hindus in Kashmir.

Kashmir is criss-crossed by high terrain and snowy roads, which ultimately leads to some spectacular locales. One such place is Gulmarg or the Valley of Flowers. Gulmarg is a few hours drive from Srinagar, through the ranks of poplar trees and amidst lush green paddy and corn fields. Indeed, it is a head-turning journey as far as natural beauty is concerned. The small town houses the world’s highest golf course as well as a ski school. Located at the backdrop of snow-capped peaks and amidst waving pines and deodar, Gulmarg remains an all-time favorite of the Kashmir-bound tourists. Gulmarg is connected an icy part of Kashmir, Khilenmarg, by ropeway. The other alternative of reaching this distant spot is just by trekking or horse-riding through rough and tough hilly roads. Khilenmarg is just snow which is apparent in every inch of the place. It also provides an unmatched view of the Himalayas, especially on a clear day. Peaks like Naga Parbat, Trishul, Gourishankar, Harmukh and the likes can be seen from here. A fortunate viewer might even have a glimpse of Dal Lake, Wular lake, Jhelum River, and Shankaracharya Hill from this wondrous place.

Sonmarg, the Golden Garden, is another similar valley. Uniquely located amidst golden grass and high mountains, this place is on the banks of Indus River and is a part of the Indus Valley. Nearby one can find the Khajjer Glacier, seat of the Indus River. This glacier can be reached by trekking from Sonmarg.

While tourists from all over the world come to the Valley in search of never-seen natural beauty, there are thousands who come for pure religious bliss. Kashmir is the seat of two of the most revered religious places for Hindus, Vaishno Devi and Amarnath Shrine.

At a height of 6,929 feet and up the hill from Jammu, is the abode of Mata Vaishno, a reincarnation of Ma Shakti. Through the ages, thousands of pilgrims have thronged to this place, despite difficulties in the journey. However, now the entire way up to the cave-shaped temple is well organized, making the journey much more comfortable. Apart from trekking, the only other options to reach the place are by horse or on ‘Dandis’ (a sort of palanquin carried by humans). The entrance to the cave-temple is very constricted, making the tourists crawl most of the way. The Charanganga flows at a lesser height, where the devotee takes a bath to enter the temple. During Navaratri, the temple area is throbbing with activity, as millions of tourists come to Vaisho Devi for the 75 day festival.

Another lifetime dream for any Hindu pilgrim is undoubtedly a trek to the Amarnath Shrine. Located 12,730 feet above sea level, it is the most revered Hindu pilgrimage to see the naturally formed place Shivalingam is worshipped. The 8 foot tall lingam is formed by the drop-by-drop accumulation of water from mountain cracks, duly converted into an icy structure over the entire year, and culminated into the final structure during the months of July and August. The journey to Amarnath is full of hardship, trekking or horse-riding through dangerous mountain passes and icy terrains, and is a journey conducted under State supervision that takes four days to reach from Pahelgaon to the holy cave. However, it is a journey that fills the mind, body, and soul of the traveler with immense satisfaction. The natural beauty and achievement of reaching God washes away the tiredness of the trekking. Most importantly, while Amarnath is primarily a Hindu pilgrimage, its doors are open to all communities of the world, and people from all religious sects can be seen walking up the hills during the Yatra.

Kashmir is indeed a tourist’s haven. There are places galore that allure tourists due to its sheer magnificence. Each and every place is worthy of a visit and warrants mention in this travel article. However, the most prominent ones are mentioned, and the rest are left up to the imagination of the travel minded wanderer. After all, there is no other way to explore heaven during one’s lifetime except to visit Kashmir!