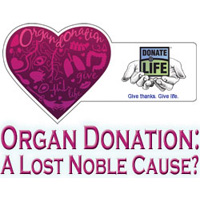 Organ Donation: A Lost Noble Cause 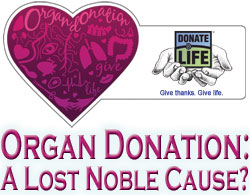 The thought of living on after one’s death may be a philosophical one, but for those who are thinking along these lines, a possible reality. But how? If organ donation has not occurred to you yet as the answer, then you have missed out on the only possibility of being immortal and that too in the noblest of ways. However, organ donation or even the thought of it makes people extremely apprehensive, and in some cases, even fearful. Such is the concern about this noble deed that no one wants his or her dear ones to ‘suffer’ even after death. There are cases where family members have refused to donate healthy organs even with the knowledge that doing so can save a life. This is despite the fact that celebrities all over the world endorse organ donation by pledging their organs to those in need. While important to understand how organ donation works, it is equally important to educate people so that the myths associated with organ donation do not remain so in their minds.

Governments all over the world have done their share in promoting organ donation. There are laws that govern organ donation to ensure donors, receivers, their family members, and also the medical institutes and doctors involved are not exposed to or indulge in any malpractice. These acts also ensure organs are not sold. Of course, where human beings are involved avarice, exploitation and unprofessional or unethical nearly always are introduced into the system. When looking beyond the apparent ironies of life, organ donation is indeed one of the most humane and noble gifts of modern society and medical advancements.

There are a couple of forms of organ donation: organs donated by living donors and those donated only after death. Organs such as the kidney can be donated by living donors, but others such as the eyes can only be donated when the donor is deceased. People can also donate their bodies as cadavers for medical tests and experiments. Organ donation is not mandatory and requires little but the signing of a few forms to become a donor. In most cases, donors carry cards that identify them as donors. There is nothing terrifying, complex or unscrupulous about organ donation if one goes about it in a legal manner. However, it is important to dispel a few myths associated with organ donation to encourage more people to support and be a part of this noble cause.

“I’ll go against my religion if I sign up for organ donation.” Contrary to popular belief, no religion prevents organ donation. All religions including Hinduism and Islam support organ donation and exalt it as an altruistic cause.

“I’m too young or old to donate organs.” Donating organs is not about sacrificing one’s youth. Just because you have become a donor does not mean doctors will run after you with scalpels! For instance, if you have agreed to donate your eyes, they can only be donated after your death. With regards to being too old for organ donation, individuals in their 70s and 80s are still fit for organ donation as long as certain medical criteria are met.

“I don’t think my organs will reach the ones in real need.” While cases of unethical practices have tarnished this cause, it is extremely difficult for organs to be bought, given to people who can wield their authority, or given to those who use their money to move their names to the top of the donor list. Medical practitioners sanctioned by government agencies maintain all donor registries.

“What if they take my other organs too just because I’ve donated by eyes?” Once a donor specifies what body part or organ they intend donating only that or those will be taken.

“I’m sure if I donate an organ when alive, I won’t be able to lead a normal life thereon.” Most donors lead normal and long lives even after donation and as doctors endorse, there are no obvious body changes that donors experience. 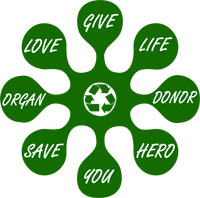 “I’m going to write in my will about donating my organs.” Some people fear families might overturn decisions to donate organs, so they announce their intention to donate their organs in their wills. However, by the time wills are read, it becomes too late to use their organs. So while an individual need not announce his intentions to his family, it is important for the family doctor to be in the picture.

Shattering Myths
Shattering myths will be very important because of the lifestyles we lead these days. Lifestyle-related diseases such as Type 2 diabetes and obesity are on the rise, and there is very little that medicine science can do in terms of finding clinical substitutes for certain body parts or organs. Organ donation is one of the noblest acts any human being can perform.