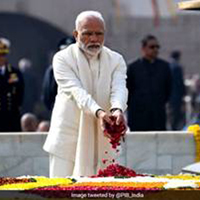 The nation along with PM Modi, President Kovind Pay tribute to Father of the Nation Mahatma Gandhi on his 71st death anniversary today. The day is also observed as Martyrs’ Day. Mahatma Gandhi was assassinated on January 30, 1948. 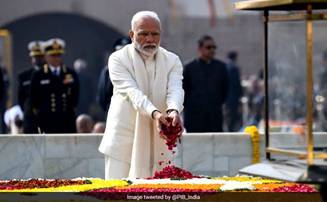 In a tweet the President wrote, “On Martyrs’ Day, we gratefully remember Mahatma Gandhi and the countless freedom fighters who sacrificed their all for our Independence #PresidentKovind”.

In his message, Mr Venkaiah Naidu said, he was an embodiment of eternal values of truth and non-violence and his life is an eloquent expression of true humanism.

He said Gandhiji is an inspiration to all mankind. His deep sense of compassion, inclusiveness and transforming noble thoughts into tangible actions with unshaken perseverance had inspired many generations of world leaders. Vice President said Mahatma Gandhi’s vision and thoughts have eternal relevance to mankind in search of solutions to global challenges.

Remembering Mahatma on his death anniversary, PM Modi tweeted, “…Remembering Bapu on his Punya Tithi. We reiterate our commitment to follow the path shown by him and abide by the values he stood for.”