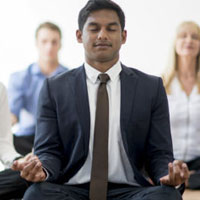 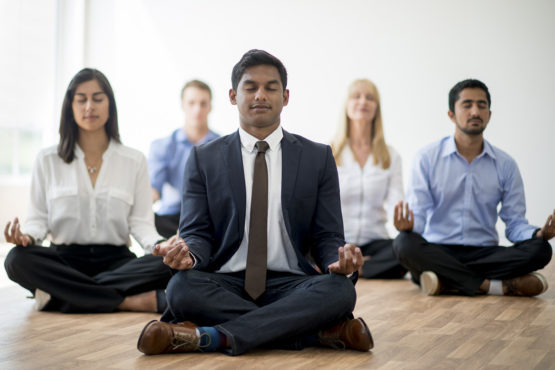 Stanford religious studies Professor Paul Harrison talks about the latest research on the origin of Buddhism and the rise of Mahayana Buddhism, which has influenced most of today’s Buddhist practices around the world.

It’s hard to find a self-help book today that doesn’t praise the benefits of meditation, mindfulness and yoga.

Many individuals engage in meditation and other practices associated with Buddhism. But not all realize the complexities of the religion, according to Stanford expert Paul Harrison.

Many of these practices are rooted in the ancient tradition of Buddhism, a religion first developed by people in India sometime in the fifth century BCE.

But according to Stanford Buddhist scholar Paul Harrison, Buddhism is more than finding zen: It is a religious tradition with a complicated history that has expanded and evolved over centuries. Harrison has dedicated his career to studying the history of this religion, which is now practiced by over 530 million people.

In a recent book he edited, Setting Out on the Great Way: Essays on Early Mahāyāna Buddhism, Harrison brings together the latest perspectives on the origins and early history of a type of Buddhism that has influenced most of today’s Buddhist practices around the world.

This new work focuses on the rise of Mahayana Buddhism, which evolved about 400 years after the birth of Buddhism. It is an elaborate web of ideas that has seen other types of Buddhism branch from its traditions. Unlike other Buddhists, Mahayana followers aspire to not only liberate themselves from suffering but also lead other people toward liberation and enlightenment.

Stanford News Service interviewed Harrison, the George Edwin Burnell Professor of Religious Studies in the School of Humanities and Sciences, about Buddhism and the latest research on its origins.

What are some things that people may not know about Buddhism?

Some people, especially those in the Western world, seem to be bewitched and mesmerized by the spell of Buddhism and the way it’s represented in the media. We’re now saturated with the promotion of mindfulness meditation, which comes from Buddhism.

But Buddhism is not all about meditation. Buddhism is an amazingly complex religious tradition. Buddhist monks don’t just sit there and meditate all day. A lot of them don’t do any meditation at all. They’re studying texts, doing administrative work, raising funds and performing rituals for the lay people, with a particular emphasis on funerals.

Buddhism has extremely good press. I try to show my students that Buddhism is not so nice and fluffy as they might think. Buddhism has a dark side, which, for example, we’ve been seeing in Myanmar with the recent persecution of the Rohingya people there.

It’s as if we need to believe that there is a religion out there that’s not as dark and black as everything else around us. But every religion is a human instrument, and it can be used for good and for bad. And that’s just as true of Buddhism as of any other faith.

Why is it important to study the origin of Buddhism and other religions?

Religion is important to our politics. So, we need to understand how religions work. And part of that understanding involves trying to grasp how religions developed and became what they became.

This new book of essays on Mahayana Buddhism is just a small part of figuring out how Buddhism developed over time.

What is Mahayana Buddhism and what are its distinct features?

The word Mahayana is usually translated as “the great vehicle.” The word maha means “great,” but the yana bit is trickier. It can mean both “vehicle” and “way,” hence the title of this book.

As far as we know, Mahayana Buddhism began to take shape in the first century BCE. This religious movement then rapidly developed in a number of different places in and around what is now India, the birthplace of Buddhism.

Buddhism itself started sometime in the fifth century BCE. We now think that the Buddha, who founded the religion, died sometime toward the year 400 BCE. As Buddhism developed, it spread beyond India. A number of different schools emerged. And out of that already complicated situation, we had the rise of a number of currents, or ways of thinking, which eventually started being labeled as Mahayana.

The kind of Buddhism before Mahayana, which I call mainstream Buddhism, is more or less a direct continuation of the teachings of the founder. Its primary ideal is attaining liberation from suffering and the cycle of life and rebirth by achieving a state called nirvana. You can achieve nirvana through moral striving, the use of various meditation techniques and learning the Dharma, which is the Buddha’s teachings.

Eventually, some people said that mainstream Buddhism is all fine and well but that it doesn’t go far enough. They believed that people need to not just liberate themselves from suffering but also liberate others and become Buddhas too.

Mahayana Buddhists strive to copy the life of the Buddha and to replicate it infinitely. That effort was the origin of the bodhisattva ideal. A bodhisattva is a person who wants to become a Buddha by setting out on the great way. This meant that Mahayana Buddhists were allegedly motivated by greater compassion than the normal kind of Buddhists and aimed for a complete understanding of reality and greater wisdom.

That’s Mahayana in a nutshell. But along with that goes a whole lot of new techniques of meditation, an elaborate cosmology and mythology, and a huge number of texts that were written around the time of the birth of Mahayana.

What’s the biggest takeaway from the latest research on the origin of Buddhism and Mahayana Buddhism?

The development of Buddhism and its literature is much more complicated than we have realized. In the middle of the 20th century, scholars thought Mahayana Buddhism was developed by lay people who wanted to make a Buddhism for everybody. It was compared to the Protestant movement in Christianity. But we now know that this picture is not true.

The evidence shows that Mahayana Buddhism was spearheaded by the renunciants, the Buddhist monks and nuns. These were the hardcore practitioners of the religion, and they were responsible for writing the Mahayana scriptures and promoting these new ideas. The lay people were not the initiators.

But the full story is even more complicated than that. Buddhism’s development is more like a tumbleweed than a tree. And Mahayana Buddhism is sort of like a braided stream of several river currents, without one main current.

Why is it challenging to figure out how Mahayana Buddhism came about?

What’s special about Buddhist studies and makes it different from studying religions like Christianity is that there is still a huge amount of material that has not been translated or studied properly.

In the last two or three decades, scholars have also discovered a whole lot of texts in a long-lost language, called Gandhari, some of which are related to the Mahayana. These documents, the oldest of which date to the first century BCE, have been found in a region that now includes Pakistan and parts of North India, Afghanistan and Central Asia.

A lot of these texts are very hard to translate and understand. And there is more material that keeps surfacing. All of that is changing our view of the early history of Buddhism.