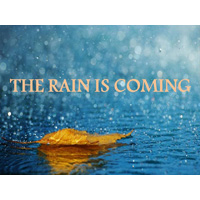 The Coming of the Rains

In this wedding special, love, dedication and commitment are dominant themes. This poem written by 17-year-old Aditya Rohit Shah describes the true love of Radha for Lord Krishna, and it is a fitting inclusion for this special.

The clouds gather in their heavenly pace, clamoring and rejoicing in the arms of the
Lord Wind; dancing, so sensuously, to the rhythmic, ambrosial downpour of the rains…

They have arrived, O Companion! Look at their mischievous romance!
Swaying to and fro in their lovely collisions, they mimic our
Lord’s Divine Pastimes; it is His vitality they pour upon us..

Radha, where art thou? Look upon thy Lord, how he glistens!
Bluer than the very waters! His golden flute resonates in the forest as the rains envelope his form; their lust is insatiable, but none may be unchaste in his embrace…

My eyes, unworthy as they are, are overdrunk with ecstasy;
I cannot tell the winds and surging rains from his rain-bearing complexion!

Aditya Shah is a high school student, aged seventeen, in New Port Richey. He has contributed poetry to several scholastic literary magazines. All his poems largely deal with Hindu philosophy (Vedanta) and Bhakti, often with Shri Krishna as the subject. He has been inspired greatly by the English Romantics John Keats, Percy Shelley, and Lord Byron, and Nobel price winner Rabindranath Tagore. He is a student of Pt. Jasraj

Post Views: 968
Bridal Makeup – What not to do
My Shadi Bridal Expo – Reception Table Competition

Categories: Get to Know, Religion