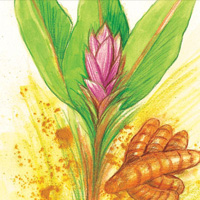 Years ago, my cousin won first place at the county science fair. His science project sought to prove the efficacy of turmeric against sore throats. It’s not surprising he chose this as his topic – I think we were all somewhat traumatized by memories of gagging as his mother smeared our tonsils with a pungeant concoction of turmeric, salt, and ghee at the first little twinge of a sore throat. And it’s not surprising he won – it was a terrific project. He swabbed his throat with a Q-tip, then smeared his oral flora onto four agar plates. One he left alone as his control, and the other three he sprinkled with turmeric, salt, and a combination of the two, respectively. In the end, the plates with turmeric and turmeric and salt grew very few bacterial colonies, while the control and salt-only plates were teeming with bacteria. His findings supported the age-old Ayurvedic belief that turmeric is antimicrobial. Turmeric (Curcuma longa) is a member of the ginger family. The root is the portion of the plant used; it is usually boiled, cleaned, and dried, yielding a yellow powder. It’s a staple spice of any Indian kitchen, and is better known as haldi, hardar, pasupu, or munjal. It’s also one of the main ingredients of commercial curry powder. It’s characteristic golden-yellow color and pungeant flavor add a distinctive touch to any dish. But its work is far from done in the kitchen.

Turmeric has a long tradition of use in the Chinese and Ayurvedic systems of medicine for the treatment of flatulence, rashes, arthritis, jaundice, menstrual difficulties, infections, and colic. Turmeric can also be applied topically as a paste to relieve pain and inflammation. Most of its use in traditional medicine stems from centuries of observation by practioners. More recent scientific research has focused on turmeric’s antioxidant, hepatoprotective, gastroprotective, blood thinning, anti-inflammatory, anti-cancer, and antimicrobial properties The best-researched active constituent of turmeric is curcumin, which comprises 0.3 to 5.4% of raw turmeric. Other constituents include several volatile oils, sugars, proteins, and resins. In Western medicine, in vitro and animal studies, as well as randomized clinical trials have shown curcumin’s efficacy.

The free-radical theory of aging is that organisms age because cells accumulate damage over time due to oxidation by circulating free radicals. Antioxidants like vitamin C and E prevent oxidation. Water- and fat-soluble extracts of turmeric and its curcumin component exhibit strong antioxidant activity, comparable to vitamins C and E.

Inflammation is a natural function of the immune system that aids in processes such as fighting infections and healing wounds. However, alterations in the immune system that lead to too much inflammation can cause various illnesses such as rheumatoid arthritis, asthma, allergies, inflammatory bowel disease (Crohn’s and ulcerative colitis), and psoriasis, just to name a few. The volatile oils and curcumin of turmeric exhibit potent anti-inflammatory effects. Oral administration of curcumin in instances of acute inflammation was found to be as effective as cortisone or phenylbutazone, and one-half as effective in cases of chronic inflammation. Curcumin regulates the expression of inflammatory enzymes like prostaglandins, leukotrienes, cytokines, adhesion molecules, and cell survival proteins.

In Ayurveda, turmeric is frequently taken internally to aid with joint symptoms, and it is also applied externally as a poultice (a paste made with water and salt) to areas of tendonitis or bursitis. Because of its ability to reduce inflammation, turmeric may help relieve the symptoms of osteoarthritis. A study of people using an Ayurvedic formula of herbs containing turmeric as well a few other herbs significantly reduced pain and disability. While encouraging for the value of this Ayurvedic combination therapy to help with osteoarthritis, it is difficult to know how much of this success is from turmeric alone, one of the other individual herbs, or the combination of herbs working synergistically. In rheumatoid arthritis, there is joint pain, tenderness, limitation of movement, and significant local inflammation (swelling and effusions) as well as systemic inflammation.

Turmeric has long been used in Ayurveda to treat various gastric symptoms such as dyspepsia, gas, ulcers, abdominal cramping, and diarrhea due to irritable bowel syndrome and inflammatory bowel disease. In an animal study, extracts of turmeric root reduced acid production much like Zantac or Pepcid do, and increased gastroprotective mucus secretion, thereby protecting the stomach and intestinal walls from inflammation and ulcers caused by certain medications, stress, or alcohol. In a more recent trial of ulcer patients infected with H. pylori, a 7-day non-antibiotic therapy comprised of curcumin, lactoferrin, N-acetylcysteine, and pantoprazole (a PPI) was not effective for H. pylori eradication. Despite this, significant improvement of dyspeptic symptoms was observed 2 months after the end of the 7-day treatment schedule. In a partially blinded, randomized, two-dose, pilot study of 207 patients with irritable bowel syndrome, approximately two thirds of all subjects reported an improvement in symptoms after treatment. In an initial randomized, double-blind, placebo-controlled trial of 89 patients with controlled ulcerative colitis, curcumin was found to be a promising and safe medication for maintaining remission of the disease.

Turmeric has been found to have a hepatoprotective characteristic similar to that of silymarin, the active constituent of milk thistle, an herb long known for its positive effects against liver disease. Studies have shown its effects in protecting animal livers from a variety of toxic chemicals. Its hepatoprotective effect is mainly a result of turmeric’s antioxidant properties. In rats with carbon tetrachloride-induced acute and subacute liver injury, curcumin administration significantly decreased serum liver enzymes, reflecting healing of the liver injury in the test animals compared to controls. Turmeric and curcumin were also found to reverse biliary hyperplasia, fatty changes, and necrosis induced by aflatoxin. Furthermore, curcumin suppresses the expression connective tissue growth factor that is required for liver cirrhosis. A recent ultrasound study showed that curcumin induces contraction of the human gallbladder. A salt of curcumin exerts choleretic effects by increasing biliary excretion of bile salts, cholesterol, and bilirubin, as well as increasing bile solubility, therefore possibly preventing and treating gallstones.

Animal studies involving rats and mice as well as in vitro studies utilizing human cancer cell lines have demonstrated curcumin’s ability to inhibit carcinogenesis, angiogenesis (the increase of blood supply to a tumor), and tumor growth. In two studies of colon and prostate cancer, curcumin was found to inhibit cell proliferation and tumor growth. Turmeric and curcumin are also capable of suppressing the activity of several common mutagens and carcinogens in a variety of cell types in both in vitro and in vivo studies. The anticarcinogenic effects of turmeric and curcumin are due in part to direct antioxidant and free-radical scavenging effect. Human evidence suggests that members of the Asian community in Leicester, England might be better able to resist colon cancer because they use the spice in cooking. They are now testing the protective effects of curcumin capsules on colon cancer patients. There are also several ongoing trials at MD Anderson and the National Institute of Cancer looking at turmeric and/or curcumin’s ability to counteract many side effects of chemotherapy such as nausea, fatigue, and mucositis (blistering of the mouth).

Turmeric’s volatile oil functions as an external antibiotic, preventing bacterial infection in wounds. In animal studies, turmeric applied to wounds hastens the healing process. Laboratory studies suggest that curcuminoids, the active components of turmeric, may reduce the destructive activity of intestinal parasites or roundworms. A study of chicks infected with the caecal parasite, Eimera maxima, demonstrated that diets supplemented with 1% turmeric resulted in a reduction in small intestinal lesion scores and improved weight gain. Curcumin has also been found to have moderate activity against Plasmodium falciparum (malaria) and Leishmania major organisms. And of course, we cannot ignore the results of my cousin’s science project!

Turmeric’s protective effects on the cardiovascular system include lowering cholesterol and triglyceride levels, decreasing susceptibility of low-density lipoprotein (LDL) to lipid peroxidation, and inhibiting platelet aggregation (essentially, thinning the blood). Turmeric extract’s effect on cholesterol levels may be due to decreased cholesterol uptake in the intestines and increased conversion of cholesterol to bile acids in the liver. The inhibition of platelet aggregation (blood thinning) by Curcuma longa constituents is thought to be via its potentiation of prostacyclin synthesis and inhibition of thromboxane synthesis. This is similar to the effect of aspirin.

No significant toxicity has been reported following either acute or chronic administration of turmeric extracts at standard doses. The FDA classified turmeric among substances ‘generally recognized as safe’. Phase I clinical trials have shown that curcumin is safe even at high doses (12 g/day) for 3 months in humans but exhibit poor bioavailability. Major reasons contributing to the low plasma and tissue levels of curcumin appear to be due to poor absorption, rapid metabolism, and rapid systemic elimination. Several commercially available supplements provide higher doses and bioavailability of purified curcumin.

The ancient practice of Ayurveda has much to offer. I am convinced that the positive effects of turmeric are definite, but much more human clinical research is needed. I will, however, always turn to the concoction of turmeric, salt, and ghee for my sore throats before relying on antibiotics. As my mother always says, “there is a medical purpose to every spice we use in our cooking.”