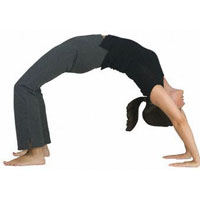 The help of Yoga is being taken these days to rehabilitate the children with disability. Recently, the Maryland chapter of the Multiple Sclerosis Society held a workshop on teaching yoga to people – children and adults – with the disease. The family center at the Kennedy Krieger Institute is about to start yoga groups for children with attention disorder, depression, anxiety and post-traumatic stress disorder. As a result of these activities, a growing number of kids with attention, anxiety and learning disorders, as well as disabilities such as autism, Down syndrome, cerebral palsy and multiple sclerosis, are embracing yoga. Eventually, their parents are reporting physical, mental and emotional benefits.

London will host the Yoga Olympia during 15-17th of September, 2006 – where more than 120 exhibitors covering a wide range of products and services associated with Yoga, Pilates, Ayurveda and Healthy Lifestyles will be taking part. Moreover, there will be open lectures, open classes for men, women and children and a demonstration area where the latest developments in Yoga will be shared and displayed. Workshops and Seminars will also take place for imparting valuable information.

A recent study by Indian scientists working over arsenic poisioning in West Bengal has found out that a homeopathic remedy based on arsenic oxide has shown “highly promising results” in mice poisoned with arsenic. The homeopathic antidote reduced the liver toxicity induced by arsenic in mice, where distilled water did nothing, and alcohol actually exacerbated the poison’s effects. The researchers are of the opinion that the remedy, called Arsenicum Album, might provide a safe, cheap and easily available remedy for the hundreds of millions of people around the world who are at risk from arsenic-poisoned water.

It’s not only counseling that has a role to play in preventing serious mental illness. In a national survey conducted by The Society of Homeopaths, 87% of patients who complained of mental and emotional problems reported positive change. It is being believed that Homeopathy can prevent the downward spiral into enduring mental illness, can help patients reduce their dependency on anti-depressants and reduce the pressure they place on GPs. The biggest strength of homeopathy is that it treats not only mental health problems but also physical and emotional aspects of the patient.

On Ayurveda mission to Hollywood !!

Robin Sheldon an Ayurveda enthusiast from the Los Angeles, USA, is on a mission to initiate the bigwigs of Hollywood into Ayurveda. It is a humble bid by an enterprising American to introduce Ayurveda as a natural alternative for those who generally prefer quick remedies. A talent agent in the field of motion picture and television, Robin Sheldon plans to establish a ‘Healing Retreat Centre’ of Ayurveda in the Caribbean by next year to assist her colleagues and friends in the Hollywood, who, in her opinion, would be greatly benefited by such a facility. By setting up the Ayurveda centre, Robin wants to help those who are ready to test the efficacy of the traditional Indian system of medicine. She says that her countrymen are largely unaware of the long-term positive effect of Ayurveda treatment.

Tea is just not a drink, but a medicine too !!

Apart from being a beverage of choice for cold and flu sufferers, the power of tea reaches far beyond its ability to sooth and comfort, according to recent studies. It has been lately discovered that white tea extract could kill bacteria, viruses, and fungi in the body, more so than the extract of other teas. The same study concluded that fluoride-rich white tea helps prevent the growth of dental plaque, the chief cause of tooth decay. At the same time, a separate study has revealed that consumption of white tea might also provide protection against colon cancer. On the other hand, black Tea has abilities to lower the oxidation of LDL cholesterols, which has been directly correlated to heart disease. Some scientists have suggested Black Tea can reduce the clotting factor of platelets in the blood and resist hardening of arteries – thus preventing death after heart attacks when consumed regularly.