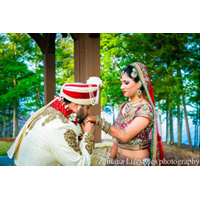 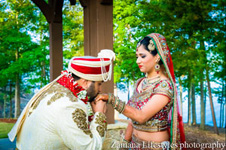 Love does not always hit you in the face. You may not notice the love of your live, even if he or she is right there by your side. If you are lucky, you may someday realize where love lurks, while some tragically let it go away. Luckily for Nilam, she eventually found she had a soft spot for Jetash, who was meant to be her true love. Despite being friends and the fact that Jetash was obviously fond of her, Nilam was reluctant to believe that she felt the same way. After willing to give them a chance, Nilam and Jetash began dating, and before long, they were engaged to be married.

The actual proposal came when Jetash called Nilam over for a home cooked meal. This had to be special, considering he had never done this for her before. A three course meal was waiting – as the saying goes, sometimes the quickest way to the heart is through the stomach! Jetash claimed full rights to her heart by asking Nilam to marry him. With all her senses appeased by the delightful meal and heartwarming proposal, Nilam really had no reason to refuse. Although it seemed like a breeze, things were not as easy for Jetash. For one, he had to struggle with getting together this special meal. Then he had to battle his nerves. He was so nervous with the whole prospect of proposing that he forgot to pull the ring from his pocket. It was only when Nilam believed him to be joking that he remembered to present the ring.

With four trusted family members by her side (her mom, dad, aunt, and uncle), Nilam formed a special team to take charge of all wedding related issues. Handling vendors and looking for possible venues topped the list of priorities. Six months before the big day, Nilam decided to hire a wedding consultant to handle intricate details.

Lake Lanier Islands Resort was the venue of choice for the couple. For its proximity to the bride and groom’s homes, it was a unanimous choice. The couple also liked the fact that the resort had the feel of a destination wedding without having to go too far from home. 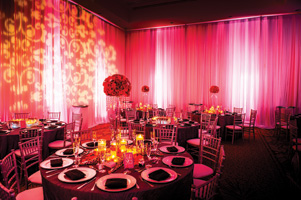 A Moroccan/Indian theme was chosen as the backdrop for the sangeet. Bold colors, low, Indian-style seating, candles and umbrellas, and live singers set the mood for a grand beginning to the festivities.

The lawns and gazebo were prepared for the wedding ceremony. With the lake completing the picture in the background, only the bride and groom were missing. Flowers burst open exposing a colorful palette with delicate fragrances, and every table was decorated with careful detail. Handmade ceremony programs added a personal touch, and special songs were played as the bride and groom entered. A grand baraat ushered in the arrival of the groom, who came in on a horse. After the wedding ceremony, the newly married couple left together in a horse carriage. 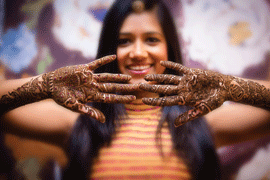 The colors for the reception were mainly black with distinct hints of fuschia and silver to add to the elegance. Judicious use of crystals and drapes, candles, beads and stones added to the splendor. The entire wedding party began the celebration with a flashmob to the popular song, “Ainvayi Ainvayi.” Nilam and Jetash even joined in! The couple then enjoyed their first dance, which ended with the bride’s father and groom’s mother joining in. Cake, food and drinks flowed easily, completing a truly memorable affair.

The now experienced and wise Nilam says that no matter how well prepared you may be, there are bound to be some hiccups, which in the end, do not matter too much. Her biggest nightmare was that the flower girls would freeze and never get down the aisle. With the wedding over, Nilam can put her biggest fears to rest, and look forward to a lifetime of happiness with Jetash.