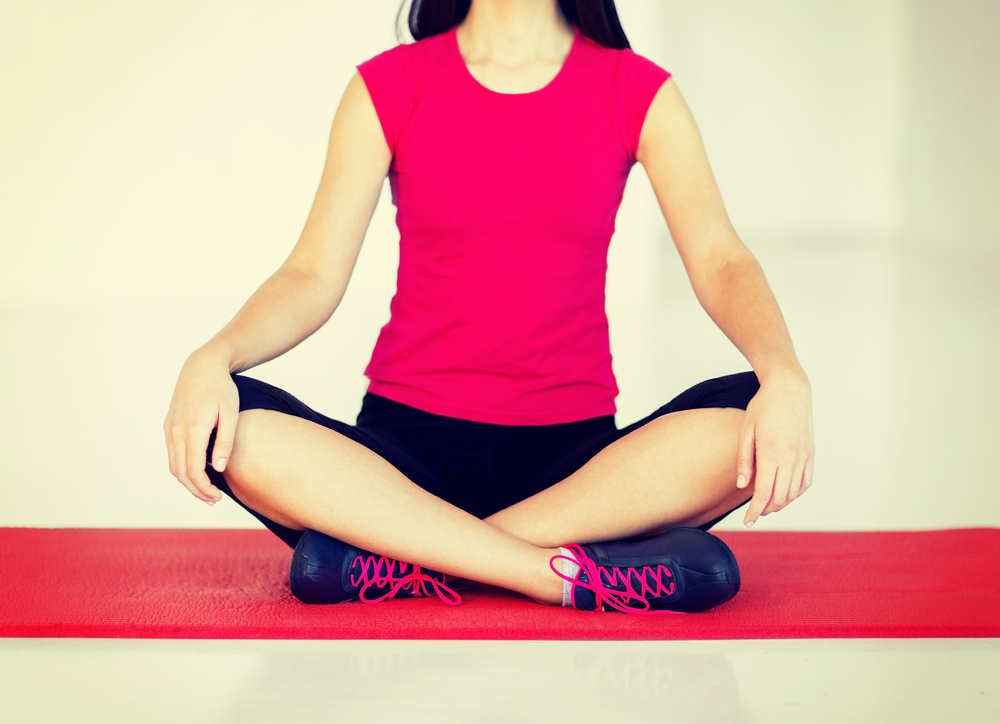 Hinduism, the oldest of all existing religions, is a genius concept developed by knowledgeable sadhus and disciplined saints. Vedic dharma is a unique practice far above all others. It is a Hindu principle that sets us apart from most religions shown most prominently in our passion for the environment. The well-known concept of ahimsa inspires us to maintain respect for our planet and its living creatures. Through vegetarianism, Hindus extend the world’s water and grain supply, saving millions of animals from slaughter each year. Hindus consume a simple diet free of meat and seafood, and we take only what we need from nature, leaving India and the world still rich in natural resources. 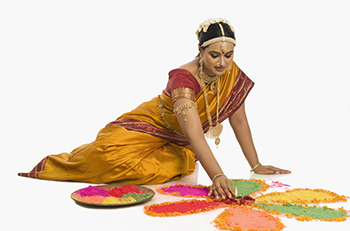 Another appealing topic that attracts so many followers of Hinduism is the art of yoga, a form of exercise as well as a different spiritual path. The physical form of yoga helps the body maintain balance through a sequence of postures and stretches, while spiritual yoga deals with everyday aspects of our life, such as worship, love, and knowledge. Also known as union, yoga is a practice that has spread like wildfire through the western world. Yoga centers are being opened everywhere, classes are being incorporated in schools, and top yoga instructors from India are bringing their eastern yoga philosophy to countries all over the world. In addition to the ancient practice of yoga, the art of meditation is a ritual that is responsible for making Hindus so relaxed and tranquil, since they find inner peace by connecting to a higher realm of existence through meditating. India is populated and bustling in the city areas, but clearly, the vast population is at peace and content due to their morning rituals of worship, meditation, and yoga. 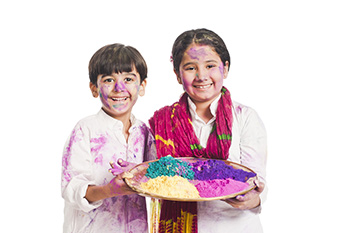 Every year, millions of Hindus and non- Hindus flock to our yearly celebrations of Deepavali, Holi, Makar sanskranti, and much more. Each Fall on the darkest night of the year, India is illuminated by billions of diyas, bringing knowledge and prosperity for the New Year and harvest season. The arrival of spring is celebrated widely by Hindus, including the joyous festival of Holi. The entertaining rituals include dancing and singing around a holy bonfire, spraying each other with water and smearing colored powder on our loved ones. These festivities are only the beginning of hinduism’s colorful and enjoyable holidays .Navratri, for instance, is a nine day holiday in worship of feminine goddesses in vedic culture. Men, women, and children dance in a “garba”, a dance in the formation of a circle that includes complex feet and hand patterns. The nights are full of colorful swirling skirts, laughter, dancing, and singing.

Vedic culture has one of the finest categories of musical art and dance. There are several types of Indian tribal and folk dances, all based on a religious aspect. One of the most popular forms of Indian classical dance is bhararnatyam. Bharatnatyam originated in southern India thousands of years ago, and consists of hand gestures called “mudhras” and complex feet patterns, all put together in a devotional prayer sung in Malayalam. Bharatnatyam was originally created as a form of worship, being that all the songs narrate the story of the Hindu gods. As a bharatnatyam dancer myself, I reflect that Hinduism has to offer the best form of devotion through art and dance. In dance, the vedic tradition holds equal importance of our male and female god, representing that creation is impossible without masculine and feminine energy. 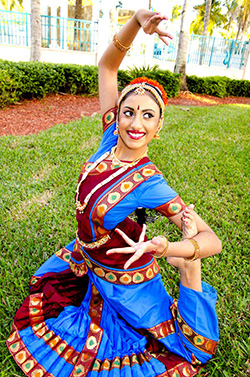 As a Hindu, I strongly agree that our values and teachings are extremely important, but it is not readily available for the younger generations of our community. Hindu education resources are limited in the United States, with such a minor Hindu population. Vedic philosophy is complex and not easy for young children to grasp, and it would be both educational and entertaining if religion lessons were incorporated into play activities, crafts, and theatre productions for the younger generations at the temple. As a member of the south Florida Hindu Temple, education stops at age 15. In my opinion, classes should be extended to a college level, so the older youths of the temple do not forget their religion while in University. Another thing I would like to add is that many young Hindus are ashamed of their Indian culture and religion. The majority of the American Hindu population is not motivated to spread awareness of Hindu Philosophy and beliefs. We are apprehensive when questioned about our beliefs, and we are often clueless when someone may ask “Why do you wear a dot on your forehead?” We don’t even know the answer. Vedic culture is considered obscene and foreign in America, and the majority of Hindus in this country refuse to educate America about our rich culture and extensive history. For example, the Jewish population on America is minor, but they have all managed to stay together and spread awareness about the holocaust and have their holidays nationalized. If we get Jewish holidays like Passover off, we should have a free day on Diwali too. Several cultures and religions were unfamiliar to the United States at one point in time, but they have evolved and became integrated into American culture over time. European, Asian, and South American culture is recognized nowadays, but we can’t say the same for Hinduism and Indian culture. If we wear Indian clothes in public, we are observed strangely and other cultures cannot understand our values and beliefs. As Hindus, we need to make ourselves known to the world. A majority of the world just knows India for the caste system, curry, and cows. If vedic awareness is spread, the world will no longer be a place full of violence, pollution, and ill-fated people. Hinduism teaches the importance of having a positive mindset. As you can see in India, there is a smile on everyone’s face; the poorest servant is as jovial as an affluent business man. They have learned to serve their rightful role in the world because it is their dharma. India is s such a lively country filled with smiles, colors, and rich culture for one dominant reason: Hinduism. The relationship between India and Hinduism is like a great mighty tree, with a sturdy, aged trunk rooted into the strong earth of Hinduism. Our way of life keeps India stable and strong, with extended branches growing healthy leaves and bearing fruits and flowers. Hinduism has kept India, the world’s largest democracy of 1.2 billion people in coexistence. The vedic knowledge of our scriptures and sages have influenced the people of India to stay resilient through years of terror and foreign empire’s reign. This religion has existed for 10,000 years, and it is still alive and thriving in the world, and it is our job to maintain and preserve it.

About the Author
Kiran Rajkumar is a 9th grader in a science magnet program in South Florida. In addition to her studies, she is a long-time pianist and   bharatanatyam dancer. She is also a Bala Vihar student at the South Florida Hindu Temple and regularly volunteers for Hindu causes in the community.