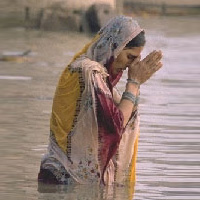 The following article is an expert from Robert Arnett’s magnificent book India Unveiled, an incredible journey through India with words and pictures. See our Book Review Section for more information. 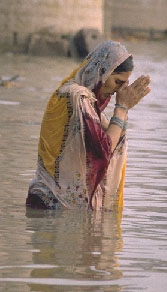 For those unfamiliar with India and her customs, I would like to share some background. The term Indians applies equally to Hindus, Muslims, Christians, Sikhs, Jains, Buddhists, Parsis, Jews or anyone who is a citizen of India (and through the geographical error of Christopher Columbus, to the aboriginals of the Americas). The name Hindu came from the Greeks who invaded northwestern India under Alexander the Great. They designated the inhabitants of the banks of the Indus River as Indoos, or Hindus. The word Hindus refers only to the followers of Hinduism, the name given to the collection of the ancient scriptures of India, the Vedic teachings, whose four books are known as India’s Sanatana Dharma, Eternal Religion. Unless a minority religion is mentioned by name, the reader may assume that the text refers to the Hindu people or their culture.

With almost one billion inhabitants who live in a space about one third the size of the United States, India is the world’s largest democracy. It has the second largest population in the world, ranking behind China. India is still overwhelmingly rural and its economy is predominantly agricultural. Even with its immense population, India is able to feed its people without having to import food. Although it has over 20 cities with a population of more than a million and is one of the world’s major industrial powers, about 70 percent of the population still lives in rural areas. In the villages, life is unhurried and only changing seasons mark the passing of time. There is still widespread poverty, but with an affluent middle class of over 200 million people, India is fast becoming one of the largest markets for consumer goods in the world, hardly an image to fit most Western stereotypes of the subcontinent.

Cultural Diversity
The diversity of Indian religions accounts for much of its cultural richness. Its ancient Hindu legacy intertwines with monuments from Jain, Buddhist, Mughal, Sikh, Christian and the British Raj period. There was even a Jewish presence in Cochin in South India which probably dated back to the time of King Solomon’s merchant fleets. Their descendants have intermarried with the Hindu population. Although there is only a handful of Jews of European descent remaining in Cochin today, a 16th century synagogue, said to be the oldest in the British Commonwealth, still exists. The European Jewish community that lived around the synagogue since the 16th century once numbered approximately 4,000.

The reader should note that even within India’s state boundaries, there are a myriad of ethnological differences which include languages, customs and foods. Because of such a diverse population, India has been referred to as a “continent within a country.”

Despite these distinctions, the Indian government has managed to foster a national consciousness. This probably would not have been possible without the resiliency of the social and religious institutions of Hinduism which are still intact after thousands of years. One of the great challenges to the Indian government at the national, state and local levels is to solve the increasingly transnational public issues of their diverse, multi-cultural population. That India has faced, endured and absorbed far greater confrontations in the past offers hope for a harmonious and prosperous future.

Languages
National homogeneity is virtually unknown, which is not surprising in a country with no “Indian” language. Fifteen languages are recognized by the Constitution, and over 700 minor dialects are spoken. 011 most Indian currency, thirteen languages are printed! Most of the major languages have their own alphabet. Amongst the Indian population, this diversity can be confusing. To a Westerner, like myself, it sometimes can become downright embarrassing. By far, my greatest misreading of a posted sign was in the Himalayan Mountain region known as “The Valley of the Gods.” While seeking a place to put on my bathing suit at a hot springs in Manali, I mistakenly entered the women’s changing room. It made me realize how careful I needed to be with so man languages and dialects bombarding me each day. Even trying to decipher Indian body language could be perplexing. In parts of India, if someone shook his head horizontally from side to side, this mannerism meant “yes.”

Absence of a national language partially accounts for the fact that English is still widely used almost 50 years after India received its independence from the British. Tour guides often routinely spoke English in addressing Indians from other regions. In Parliament, where many top officials still address their colleagues in English, major efforts have been made to promote Hindi as the national language, though it is only spoken as the Mother tongue by about 20 percent of the population. Although Hindi is spoken predominantly in the north, it has little similarity to the Dravidian languages of the south. Considering the distinct and proud cultural legacy of the south, which was never conquered by Mughal invaders, opposition to Hindi is not unexpected and naturally conflicts arise.

The school systems in most states in India teach three languages: English, Hindi and the vernacular of that particular state or region. In addition, some students learn the ancient Sanskrit, the classical literary language of the Indian scriptures which is the world’s oldest surviving language. Even Western linguists agree that Sanskrit (which consists of fifty letters, each one having a fixed, invariable pronunciation that prevents mispronunciations) is the most perfect phonetic language in the world. George Bernard Shaw agreed. He wrote a wise and witty essay urging the adoption of a new English alphabet with an additional sixteen characters, which would approximate the phonetic perfection of Sanskrit, even if “it cost a civil war!” Because of Sanskrit’s pleasing sound and meter, I usually could distinguish it from the local dialects or from Hindi. Often, when hearing Sanskrit prayers, it would evoke a tingling sensation within me, as if it was resonating in my inner core. My finding someone who spoke English was seldom a problem, although there were times on local country buses when no one knew English and I had to fend for myself Even when sign language failed, I never missed my stop.

Religion
India has possibly a greater diversity of religions and sects than anywhere else in the world. It is the birthplace of Hinduism, Buddhism, Jainism and, Sikhism, and is an important home to Zoroastrianism, one of the world’s oldest surviving religions.

Hinduism, India’s majority religion, is practiced by about 80 percent of the population. It is difficult to define the religion. It has been said that every metaphysical thought that ever was, is or ever will be has already been expressed in India. Hinduism contains various approaches to achieve its ultimate goal, oneness with God, and it could take a lifetime of study just to master even one of its many aspects. Hinduism’s earliest scriptures are the Vedas. These texts were passed down orally, and were only transcribed during the last millennium. The corpus of the religion’s sacred writings also include the ancient allegories, the Mahabharata and Ramayana, the world’s longest epic poems. Their complex symbolism represents the physical, mental and spiritual battles that each of us must fight and win in our daily lives. Contained within the Mahabharata is the Bhagavad Gita, “Song of the Spirit,” the Hindu Bible which is the most beloved and sacred scripture of India. Its verses recount the sublime wisdom given by Lord Krishna to his disciple, Prince Arjuna. Hinduism embraces the doctrine of reincarnation, which declares that our unfulfilled material desires force us to return again and again to earth until we consciously attain oneness with God. Even the early Christian Church accepted the principle of reincarnation, although this doctrine was declared a heresy in 553 A.D. by the Second Council of Constantinople.

Hinduism is greatly misunderstood in the West. Most occidentals do not realize that Hinduism is a ,monotheistic belief in only one God, who as Creator is beyond time, space and physical form. The entire pantheon of Hindu gods and goddesses are merely symbolic representations of different attributes of the One, Unmanifested Spirit.

Hinduism created a different deity for each of God’s numerous qualities to make God seem more real and approachable. I noticed that in the villages, many female followers of Lord Krishna preferred to worship him in the form of a baby rather than as a man, no doubt because it made it easier for them to share their maternal feelings for the Lord.

Hinduism is a very tolerant religion. It does not claim exclusivity of the true God only for itself. One of the Hindu scriptures, the Rig Veda, clearly states: “Though men call it by many names, it is really One.”

Hinduism also acknowledges that God took many human embodiments on earth, to include the saviors of other religions. A Divine incarnation is called an avatar, one who has attained union with Spirit and then returns to earth to help humankind. He is Divinity who has descended into flesh.

Hindus consider Christ to be an avatar, but believe God also took form in other saviors such as Krishna and Buddha. A Hindu sage and poet wrote, “…I know Thou hast delighted, and wilt ever delight, in revealing Thyself in different forms … but Thou hast only one Nature: Perennial joy.” Hindus also recognize the Divine inspiration of prophets such as Moses and Mohammed.

Muslims are India’s largest minority. Though they comprise only about 12 percent of the population, they account for the largest Muslim population anywhere in the world outside of Indonesia. They believe that the Koran, the sacred scripture of Islam, contains revelations that were given directly to Mohammed by Allah (God). Islam shares common origins with Judaism, including the belief that creation began with Adam and that Ibrahim (Abraham) is an important prophet. The religion also recognizes as prophets Nuh (Noah), Musa (Moses) and Isa Uesus).