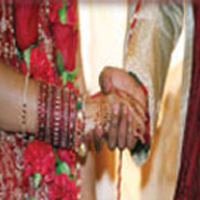 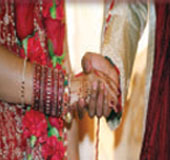 Besides the religious meaning behind the significant seven steps also called Saptapadi, there is also a mathematical rationale on performing the seven rounds circling the fire. A circle is 360 degrees and all numbers between 1 and 9 divide into 360 except the number 7. It becomes a non-terminating number, hence symbolizing the marriage as indivisible.

The ends of their garments -the bridegroom’s khes and one end of sari of the bride – are tied together by the Panditji signifying the marriage knot. Then both shall stand facing the north. The bridegroom places his right hand upon the right shoulder of the bride. They take the first step in the northeasterly direction.

The bridegroom says: Having completed the seven steps, be thou my life long companion. Mayst thou be my associate and helper in successful performance of the duties that now devolve upon me as a householder. May we be blessed with many children who may live the full duration of human life!

After the completion of the seven steps ceremony, the couple (with knots tied to each other) take their seats. The Hindu wife now takes her rightful place on the left side of her Hindu husband as the marriage has now been religiously solemnized in its entirety. Now the couple is deemed husband and wife. The husband garlands the wife, and she in turn garlands her husband. Using Fresh Flowers in Hindu Wedding has very special Significant

May the first step lead to food that is both nourishing and pure.

May the second step lead to strength (at the physical, emotional, intellectual and spiritual levels).

May the third step lead to prosperity.

May the fourth step lead to all round happiness.

May the fifth step lead to progeny (noble and virtuous children).

May the sixth step lead to long life.

May the seventh step lead to bondage (through harmony, understanding).